I've upgraded from the 100Mbps to the 300Mbps internet plan on 8/7/22 and I've only received worse speeds as a result. It varies so much throughout the day but more often than not, its worse than before. Previously, it was at least consistently decent speeds but now its anywhere from 2Mbps - 90Mbps, and has never broke 100Mbps. This was tested on my desktop PC that I've been using just fine with the internet for the past 8 years. I've attempted restarts of the modem/router but its actually to the point where it even has issues connecting to the internet sometimes. Is there any way to investigate the reason for this? Why am I paying more for worse?

Upload speeds: up to 10 Mbps 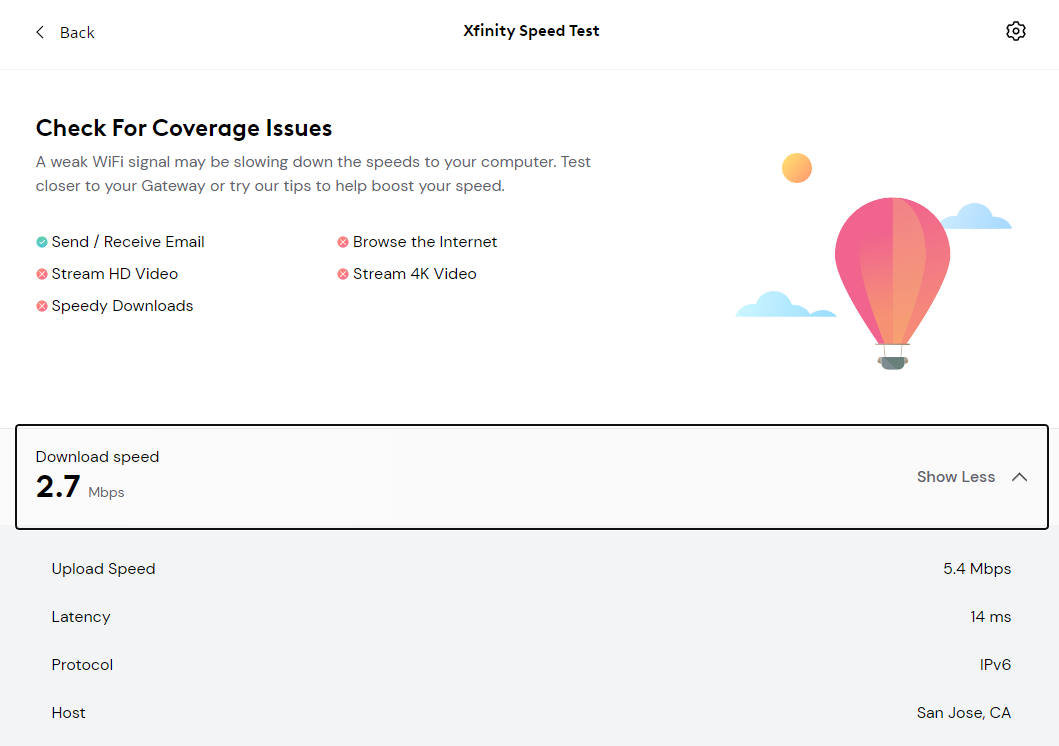 Note that the 6141 is no longer an approved device. When it was approved, it was for use with plan speeds "Up to 284 Mbps" (see https://www.xfinity.com/support/devices).

Using devices on speed tiers for which they are not approved, and using devices that are no longer approved, tends to produce unexpected results, often speeds well below the manufacturer's rating. You need to pick one of the modems on the "Devices" page that is approved for the 300 Mbps speed tier or drop back to a lower tier.

Please be aware that there are 2 kinds of responses in this Forum: Replies and Comments. When you Comment on a post by scrolling down to "Comment on this post here...", I am notified of your response. But if you select Reply, I am NOT notified and may not be aware of your response.

Thanks for the response. I'll attempt to get a modern router.

I've bought a Motorola MB8611 Cable Modem to see if it fixes the problem.

I did a speed test before I swapped it out

So effectively no change and I'm still not reaching the promised 300Mbps, and still haven't broken the 100 Mbps barrier

That router has only 10/100 ethernet ports so you'll only get around 90 Mbps hardwired to it. For a test, what do you get with a computer that is hardwired directly to the 8600 cable modem (no router in the mix) ?

@EG Yes, that was the problem! I didn't realize my 450Mbps wireless router only had 10/100 hardwire ports. Guess I'll have to buy another piece of equipment!

@user_d171ff Yeah. That's an older N450 model. It also only does the older wireless N protocol. You should get something more modern that has more horsepower for both wired and WiFi !

My speedtest results when plugging directly into the modem

I have the same problem. I upgraded and was told that my current modem/ router would support the change 100 to 300 and my speeds are slower than NCC the change. Although, when I test my speed using the Xfinity app it reads ( not direct quote; can’t remember the exact words)  you are getting all your speed!

But when I use another speed test it shows a completely different outcome.

My modem/ router is the black box looking thing.

Your  ARRIS SURFboard SB6141 modem limit is 100 Mbps not 1 gig. So you can't get faster unless you replace your modem that can handle 1 gig. read the specifics. On amazon the description says limited to 100Mbps.  whoever told you it can handle 1gig  misinform you. It's the hardware issue.

many modem have faster wifi speed than wired line.   For example. My modem wire can only handle 100Mbps.  If i pay for more speed I won't get it cuz my hardware can't handle it.  But on xifinity side , they see you getting 300Mbps.  I don't need more than 100Mbps for one household.

If you getting wifi router to connect more stuff,   make sure the ports are 1gig wired ports in the back.  Some wifi router can let you do 1 gig wifi  but limit to 100Mbps wired.  So make sure the back port can do 1gig too.  These specifics matter with hardware.

Also when you see description for many wireless router. Often people mislook the hardwire speed.  The 450Mbps is the stats for the wifi.  Most advertisement focus on the wifi speed and ignore mentioning the hardwire speed . you often have to go look at the specs.

Another thing you might want to check is settings after setting up.  My modem default seems to limit my speed and limit connected device.  I had to go into setting and change it to unlimited speed and allow more device to connect to wifi.   Some company have limited speed as default.

hi, idk if you were responding to the initial post or my comment. I have the  modem/ router that XFINITY supplied. If your response is to my comment I will contact xfinity for an upgrade. Thank you!

Yes! Please send us a message, so we can asssis you with all of your internet issues. Thanks!

FWIW. The original poster's @user_d171ff has been resolved.

Please create a new topic of your own here on this board detailing your issue. Thanks. Marked "Solved" thread  is now being closed.