The new Xb7 has well documented issues with slightly older printers, they don't work on the XB7 wirelessly, you can see some of the threads I linked about this issue below the images. The Xb6 router works just fine though before we upgraded, and people end up having to switch back to the Xb6. My printer is 7 years old, it should be compatible.

So I went into the XB7 gateway (10.0.0.1), separated the 2.4 and 5ghz bands, then disabled the 5ghz band. Reset the printer and gateway, Connected the printer to the 2.4 ghz band only.... Still having an IP conflict issue. Epson WF-845. The printer is able to find and connect to the network, and shows up as a connected device in the Xb7 gateway, but it has an IP conflict issue. Its unable to communicate, not useable, cant print.

I then changed the Epson printer from DHCP to Reserved IP within the XB7 gateway, and made it 10.0.0.212 Then went into my printer software and manually set the same IP. Still does not work. Any ideas? Is the gateway info wrong? Any ideas?

See image of my gateway settings here if the image is removed below by the xfinity robot: https://imgur.com/a/bMUlCXn

Threads about this issue over the past 18 months:

Have you tried setting the printer to "Acquire Automatically"? That's how I have my "Reserved IP" devices set up.

Yes, I tried reserving the IP in the Xb7 router first, while leaving the Epson Printer as "Acquire Automatically". No luck. Then also tried manually inputting the IP on the epson. Neither worked.

Try to remove the word epson in the comment section, replace it with 1 word only, at the top with no spaces, the Xb7 can be finicky that way

@jlavaseur But Epson is one word? I typed that in, it was blank originally.

But I had read about that and tried with and without a word in the comment box.  No  luck....

You Must have a word or it will not work, just change it  in case it’s stored someplace from trying

Okay, I tried just putting "car", no spaces, nothing else. Restarted everything, but still no luck.

odd i just posted a reply but it don't show up, after looking at your screenshots again, i see a problem, on your printer select obtain a Ip  address automatically, don't try to set a static IP

@jlavaseur I tried that too a couple times. @BruceW up above suggested that too, so I tried both auto acquire on the printer and setting a reserved on the printer. Neither worked

So I have 2 printers that are approximately 10 + years old, a epson and a canon, both work flawlessly with my Xb7, I didn’t have to anything but enter my credentials in the printers control panel, so the fact that you said it showed connected to your gateway, is not a issue with the Xb7, that being said, if your computer isn’t using the correct IP of your printer, you might get that error, the only time I had a issue was when my printers IP changed and my computer was still trying to use the old IP, so your doing all this unnecessary configuration, yet you failed to mention if you configured your computer or device to use the correct IP, personally I would remove any reserved IPs, enter your WiFi credentials into your printer and let it connect, then check the IP it is assigned, you don’t mention what operating system you use, but do a new printer setup on your computer or device, make sure it is using the correct printers IP, I can print from all my devices without a issue, you seem to be making it more difficult then it actually is, one time my epson couldn’t see my WiFi network, but it was because the gateways channel changed,  it needed to be on a certain channel for it to connect, people give the Xb7 a bad rap, I find it extremely reliable and fast for a rented gateway, I upgraded from the Xb6 and the Xb7 out performs it in every aspect, I use win 10, Linux and FreeBSD operating systems without a single issue, plus apple devices, I can print from them if they are configured correctly, just my thoughts

@jlavaseur  "you seem to be making it more difficult then it actually is"  ....Not at all, I'm well aware of all the basic baby steps and ideas on this and tried those first. It's not simply my computers trying to connect to the printers old IP address. Because when I do a connection status check on the Epson printer itself, it prints out a report saying an IP conflict is detected with the printer and the router as I mentioned. And yet I check the network info section on the Epson printer screen itself in the settings and can confirm the IP address matches the IP address set on the XB7 router, and the gateway and the MAC address all match.

"you don’t mention what operating system you use". Not relevant in this case, as the issue is the printer, not my computers. However, we have 2 different computers, one with Windows 8.1. One with Windows 10. Neither can find the printer on the network. Also, all the setup attempts we did, we did manually on the printer screen itself in the network setup process, or directly connected to the printer with a USB cord using Epson setup software from scratch, and Epsonnet Config.

I understand you have an even older Epson printer, I guess it is just different hardware, different internal software, different setup than mine. When googling this problem, others have the same issue and tried many of the same steps with no luck. We also tried changing the default gateway address of the XB7 to the 192.168.1.1 standard that most routers are/were, that did not work either. I appreciate the ideas, but it may just not be wirelessly possible with this model printer.

Also, all the setup attempts we did manually on the printer screen itself in the network setup process, this concerns me, reserved IP falls within the dhcp range, you can view that in the gateways admin page, setting a static IP dont fall within that range, it falls outside the dhcp range, so they are 2 completely different IP ranges, so your screenshot shows you are trying to both at the same time, you can only do one or the other with a single IP address, so i can imagine there would be a conflict, also look at the top of the printers config page, it states this also, the reason i asked the OS, because on my different operating systems its not the same for setting up a printer

Either way though, the XB7 does NOT allow me to set a static IP outside of the DHCP range. I read online people saying the static/reserved IP should not be within the same range as the DHCP range, but yet the XB7 forces it to be in the same range. So for example, say the XB7's DHCP range is 10.0.0.2 - 10.0.0.253. If I try to set my printers static IP as 10.0.0.297 (outside the range), the XB7's gateway software has a pop up blocking me from doing so, see picture 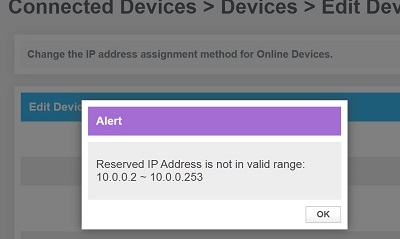 So I replied to you, I hope you see it, it’s under reply’s, I am not sure how it got there

@PcSteve I'm having the same exact issue as you.  The only difference is I have an epson wf545.    I've tried pretty much everything you've tried except doing a factory reset on my xb7 and then setting everything up manually.  I used the xfi app and did the automatic transfer but just can't seem to figure out what got cached as everything else connected flawlessly.  I found others that have this issue have went back to xb6.

So check your firewall settings, if it’s on Maximum Security, it blocks lan traffic, so I just verified this, change to a lower or custom setting, printed right away so after some more checking my printer won’t even print on the low security setting which is the default one, so I made a custom one, prints beautifully now

Same issue with me but with the Epson 725. Everything was fine on the XB6 but now the only device in my house that won't connect is this printer. I've tried everything I've seen in the threads about this issue. Hoping someone at Comcast can find the solution. Yeah, my printer is old, but its still running on a 802.11g band and even without a password, it won't connect. Hardwired ethernet and USB work fine. Hoping we can find a solution.

Some epson printers will only connect on certain channels, my epson printer is roughly 11 years old, works flawlessly with my Xb7, are you by any chance trying to set a manual ip?

Did you say the printer works connected Usb and ethernet? Or don't work at all? Also whats your modem/gateway setup?

Printer connects through Ethernet and usb fine. Wireless is the only thing that doesn’t work. Was working on the xb6.

My modem setup is just the XB7, no pods, no other router. I have Ethernet to a windows 10 PC and Ethernet to a Verizon cell tower booster. All other devices connected through wireless. Wireless is 2.4 and 5 on the same SSID. (I’ve tried splitting them to test the printer on just the 2.4, no luck)

So, i am guessing the the Verizon Booster is probably is on a different subnet,  probably where the 192.168.0 comes into play, So, when you tried to set a manual IP, if it wasn't in the 10.0.0.244 - 10.0.0.254 range absolute fail, according to your dhcp server Ip range, So, printer connecting and printer printing, two different things to me, I ask because my epson connected but failed to print, i was easily able to fix, But if your printer prints using usb and you set it as the network printer, it should print on your devices wireless as well as ethernet  connected devices as long as they are on the same subnet

So the printer prints over usb and Ethernet but I want the printer to be connected through WiFi only. My printer is far from my computer and the usb or Ethernet cord will be in my way. I’m in an older house so no Ethernet plugs on the walls. (I know there’s other solutions like Ethernet over power or MoCa I just want the darn WiFi to work like it did on the xb6).

Ok, fair enough, so when you try to connect via WiFi, does your WiFi ssid show up at some point, where you can put in the correct details? Or does it not show up at all?

It does show up on the printer screen. I select the SSID then fails to connect.

Sorry I am asking so many questions, does it give a error? Or no error? How do you know it doesn’t connect? It can be connected and you still can’t access it