Community Forum
Turn on suggestions
Auto-suggest helps you quickly narrow down your search results by suggesting possible matches as you type.
Showing results for
Search instead for
Did you mean:

Why is Xfinity Gigabit such Trash?

Why is Xfinity Gigabit such Trash?

I'm curious if others have experienced issues with Gigabit Internet from XFinity - I certainly have / am having seriosuly degraded speeds.

Background: cancelled triple play + home security becuase they're a cost center that delivered no real value.  I upgraded from the mid-tier internet speed to Gigabit Internet.

I purchased a Nighthawk X4S (c7800) AC3200 WiFi (DOCIS 3.1) - while waiting for that to ship I continued using the Modem/Router I was leasing from XFinity. To be honest, the speeds on XFinity's hardware weren't exceptional, but I was able to stream content on my TV downstairs and all my other devices seemed to work fine.

I live in a 1200 sq ft townhouse (1st and second floor total) and the router/modem is on my second floor.

I can't stream 720p on my TV downstairs.

I spent an hour on the phone with XFinity Customer Support and received no resolution. Was only told that those speeds should be higher, which is obvious. I was also told that due to COVID-19, no technicians would come out. Were it not for the fact that Customer Service Rep was an aboluste gem, I would have lost my marbles right then and there.

After, I spent an hour on the phone with Netgear support in the Phillipines with a customer service rep who tried his best to help. He was geniunely frustrated and confused by the speeds. We changed the WiFi Channel on the 2.4MHz from "auto" to 11 to 6 to 1 and everything in between while observing the Channel Map for networks in my area. We then changed to MTU Size in WAN settings from 1500 to 1472 (recommendation by NETGEAR from troubleshooting). Saw a momentary spike in wired connection from 150Mbps to 860Mbps (still not close enough to 1000Mbps) before it dropped back down to 120 - 160Mbps range. There was also a mometary spike on the 2.4MHz network from 40Mbps-80Mbps range up to 280Mbps, but that dropped back down to the lower range as well.

Ultimately, the Netgear rep suggested it could be a HW or bug issue with the hardware itself, so I requested a return and was shipped a new Nighthawk X4S.

I set up the new Nighthawk X4S this morning and have relatively the same absymal speeds as on the last device. I followed the same remediative actions suggested by Netgear with no luck.

It is clear that the speed issues are on the Comcast side... that, or XFinity knowingly advesrtises speeds it is simply unable to provide.

So... who else is expericing similiar issues?

The chat bot forces customers into an infuriating and indefinite loop of questions that attempt to redirect customers to digital resources rather than interacting with a human being. I understand operational tempos have shifted due to COVID/WFH; however, there should be technical support available to answer questions as your entire customer base has shifted to WFH as well. I understand this contributes to wait times, but in the case of Xfinity you're prevented from even getting in a queue.

XFinity is a dishonest service that makes getting assistance difficult. In fact, they make everything difficult. I can't think of another industry that provides a paid for service that cannot be managed from a Web UI... XFinity intentionally prevents customers from managing their accounts and if a customer is lucky enough to be connected with a human being they're directed to a representatives that try to steamroll "bundled plans" rather than address technical / billing concerns. Customer support seems to be nothing more than a sales funnel. These reps are conviently not allowed to send emails with itemized descriptions of the plans.

I have beenhaving a similar issue. I only get ~500 or lower mbps when i should be getting 1000. the funny part is that all the xfinity speed test shows i get 900+ but multiple other speed tests on other sites showed me i only get 500-200. and trying to get the problem fixed was so draining and it still hasnt gotten fix for me. i hope you find a solution soon.

I have the same issue in the Seattle area. Pay for 1GB but mostly ranges between 50mbps to 180. Packet loss and latency spikes are also issues. Comcast is the worst company and has a monopoly in most areas so they could care less. I’ve been told is a node issue and rather then fix it, it’s a wait until the pandemic is over. Oh they can take A whopping $20 off your bill though if you haven’t done that yet since your internet has been trash.
1 Like
Highlighted

Finally got past the chatbot loop last night and got to a "customer service" rep in chat.

I explained the issue, the remediations I have taken to include replacing my Nighthawk twice and the rep still tried to walk me through the same cookie-cutter remediation steps. Here is the end of the exchange:

I apologize for the inconvenience. I would request you to restart the modem once, please unplug the power cord and plug it back in after a minute. Please let me know once the lights on modem are on.

I cannot tell you how many times I've done just hat

The browser is unable to connect to the chat server. Some messages may not have been delivered and you will not be able to send or receive new messages.

The rep restarted my modem without my consent to boot me from the chat because he did not like what I had to say!

After, I got a hold of different rep called "Gilbert" shortly after. He apologized and promised someone would call me in the next 2 hours (6:45 pm - 8:45pm)  - that call never came.

Called XfiNITY and after a long wait on the phone I was routed to a call center int he Phillipines - to be clear, I understand these folks are just answering calls and they're perfectly nice for the most part... but they don't have any answers.

The rep revealed that the single biggest complaint they are receiving is for their Gigabit service and speeds at or below 200Mbps.

After 42 minutes and many apologies later I was told that someone would call me "sometime today". When I dug into this question by stating that I had heard that before and never received a call back I was told that the only ticket in the system for my account was logged on May 12th 2020 - this was when I canceled my Triple Play Service and initially complained about slow speeds / unclear billing.

So, not a single "rep" that I have spoken to over the past several weeks has opened a ticket regarding my slow speed. They have repeatedly placated me by promising to address the speeds, but not a single rep took the time to log a ticket for my issue. How can it ever be addressed if there is no record of an issue?

It is clear to me that XFinity has no respect for its customer's time or money. I truly believe the customer support network is designed to be ineffective so that customers get so fed up of the process that they simply accept the degraded speeds. It is nothing more than a sales funnel to ensure customers stay with Comcast. XFinity holds an monopoly on the seaboards where access to competition is non-existent - I have serious questions about the ethics of this ISP.

10:28 AM, 42 min call full of apologies and promises to address my issues via a call back later in the day.

7:28 PM EST, no call back from XFinity as promised.

I have filled a complaint with the Office of the Attorney General of Massachusetts. I encourage everyone reading this to do the same in their state. ISP's are unfair monopolies & need to be held accountable should they fail to deliver on their advertised services. XFinity is failing it's customers.

Comcast Xfinity is in breach of its terms of service, knowingly advertising for internet download speeds it is incapable of providing. This is the largest complaint in their support forums: https://forums.xfinity.com/t5/Your-Home-Network/bd-p/YHN - customers are being outright ignored and lied to.

I pay for "Gigabit" internet. This entitles me to download speeds of up to 1000Mbps. Wired speeds should be able to be achieved >900Mbps. Wireless should typically be 50% of that speed, so in the range of 400Mbps - 500Mbps.

I have called Xfinity Multiple times: I have been placated, not followed up with, & ignored completed. Xfinity has a monopoly on & is taking advantage of MA residents through poor customer service and false advertisement. This issue is impacting tens of thousands of unaware residents.

Link to my specific forum of complaints:
https://forums.xfinity.com/t5/Your-Home-Network/Why-is-Xfinity-Gigabit-such-Trash/td-p/3346919

Tested my speed earlier today.  Obviously whatever your issue, it isn't that Comcast is advertising a speed that they can't deliver on. 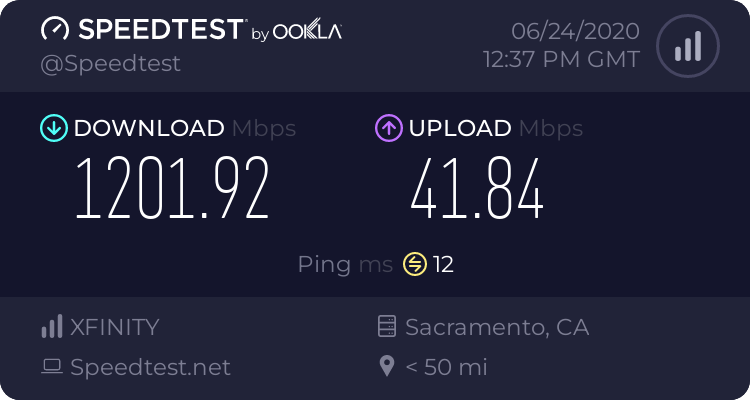 As for being "censored", note that

This thread is now closed. Should you change your mind and wish to receive technical support here, please start a new thread. Thank you.