Modem is a Motorola MB8600. Router is a Netgear Orbi RBR750. I switched from Google WiFi to the Orbi and enabled LAG on both the modem and router. I am getting downstream 1400Mbps and upstream around 40Mbps. However, every few days, the Internet drops and I cannot reach the modem at 192.168.0.100. Restarting the modem and router usually does the trick, though today DNS did not seem to resolve and I substituted 8.8.8.8 as DNS 1, and now DNS is resolving.

I did find an attenuator in-line with the coax feeding the modem (this is the direct feed from the street). With the attenuator in-line, the OFDM PLC channel power was -1.7dBmV and SNR 37.9dB. Upstream power was around 45-46.5dBmV. No corrected or uncorrected errors. With the attenuator removed, the OFDM PLC channel power is 4.4dBmV and SNR 38.2dB. Again no errors. Upstream power is 38.5-40dBmV. The rest of the stats were pretty consistent (see below - no attenuator).

The current error shown in the modem log is SYNC Timing Synchronization failure - Failed to acquire QAM/QPSK symbol timing; I can clear the log and all looks good but at some point the modem dies again and the logs seem to clear upon a power cycle.

I've not tried disabling LAG to see if this changes anything. The modem is running firmware 8600-19.3.15, Orbi running V3.2.18.1_1.4.14. I've not tried resetting the modem, just powering it off and on. I could try putting the attenuator back, but I’m worried about the downstream OFDM PLC channel power and I think the upstream power levels are in spec. 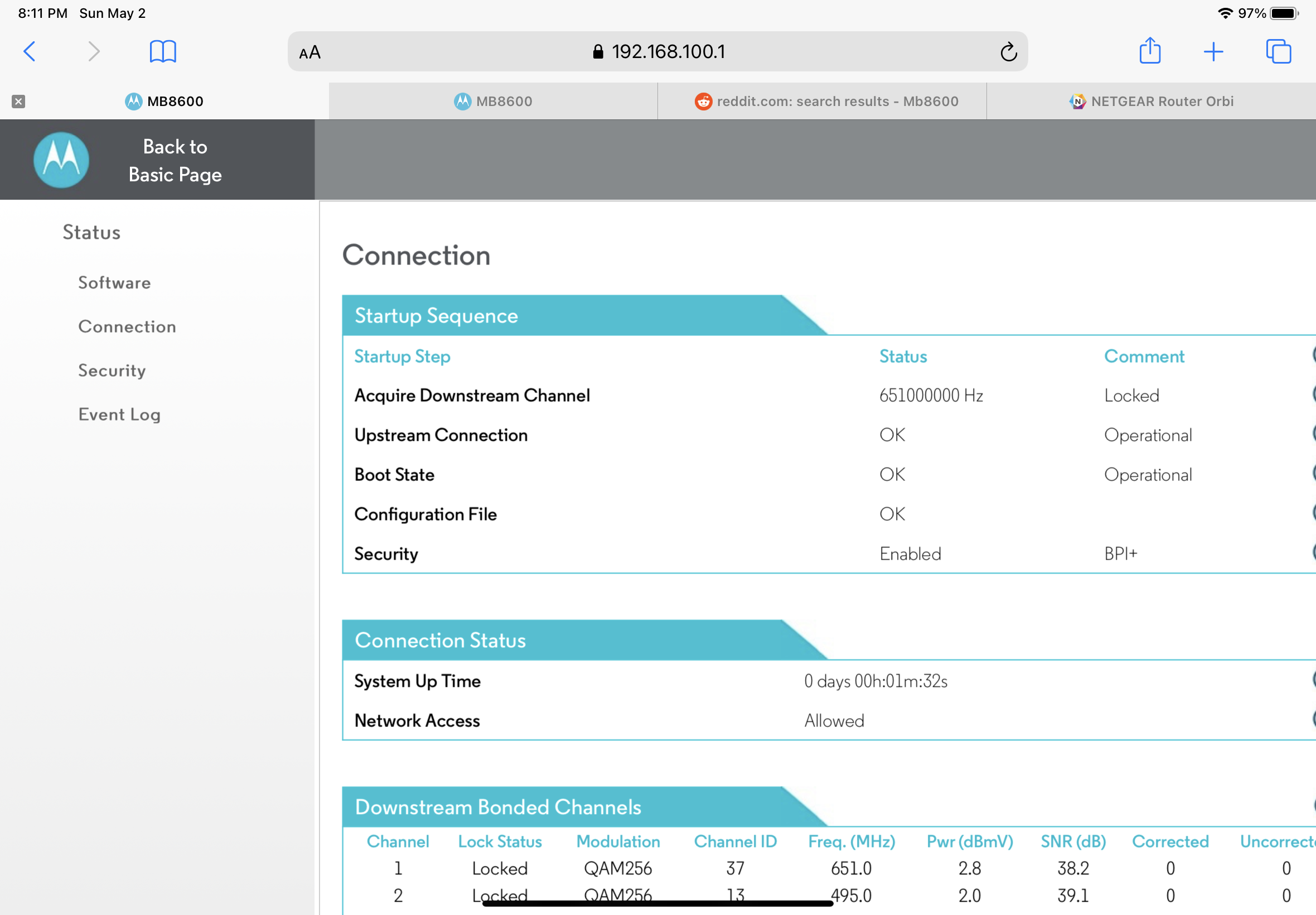 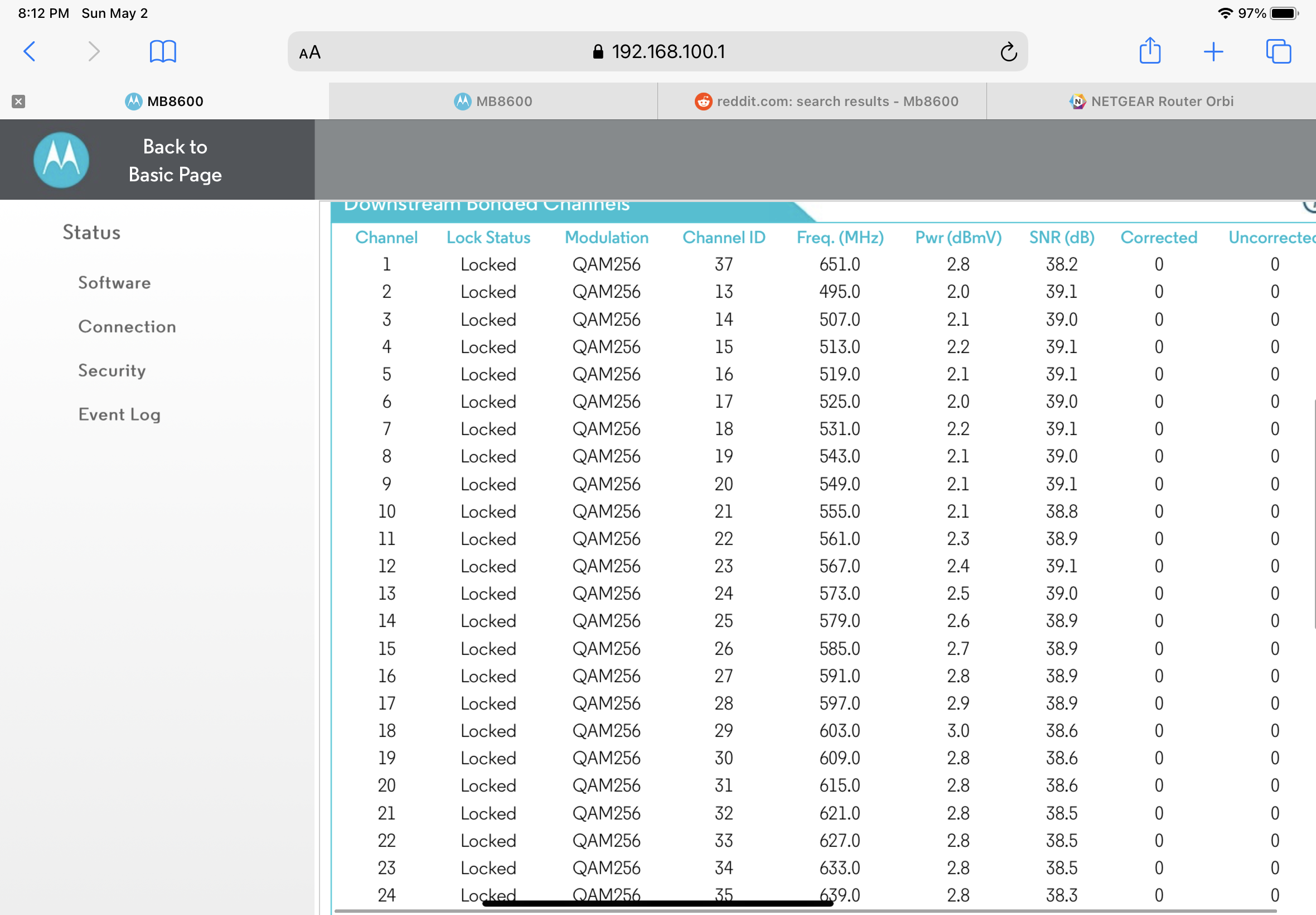 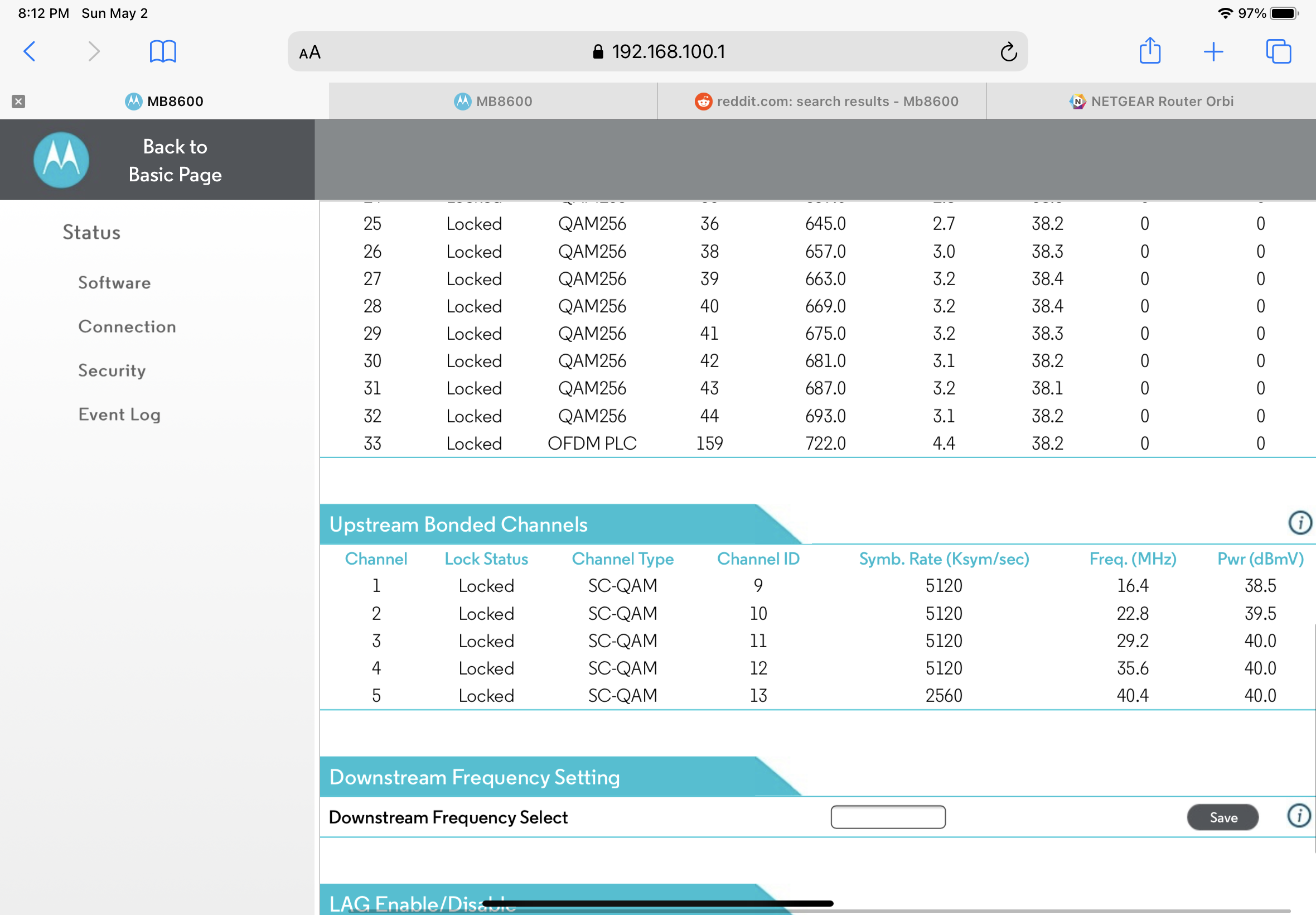 The signal stats are o/k. Are there RF error log entries being shown ? If so, please post them as well in their entirety.

No. This is all I have in the event log.

What was the total "system uptime" of the modem when you obtained those event log entries ?

Uptime was 30 minutes or so. It has now been almost 2 days and there are no additional log entries. However, I now have a handful of corrected errors on some of the downstream channels (no more than 1 or 2), see below. 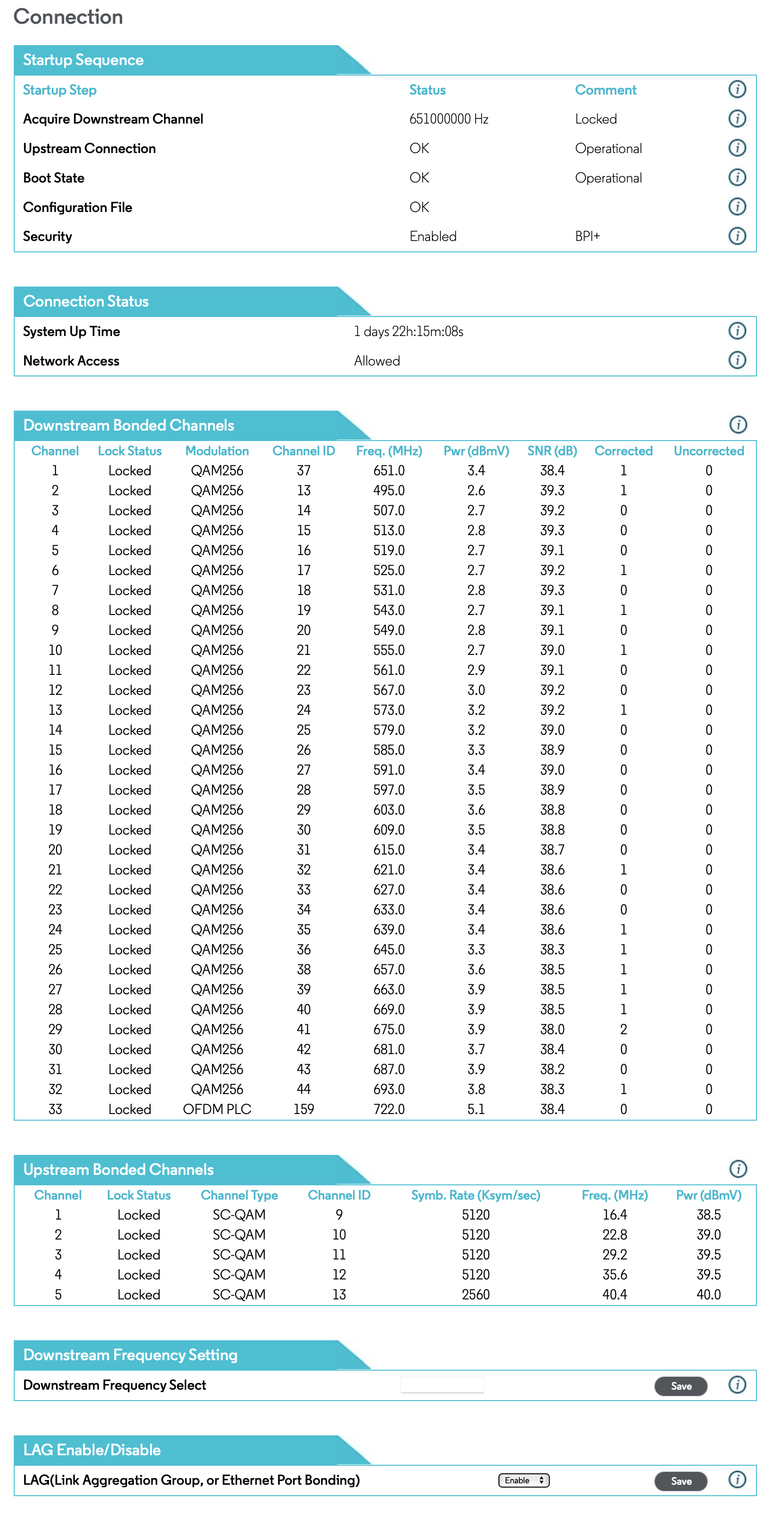 The signal stats are o/k but the error log entries indicate that something is going on. Perhaps there is noise ingress into the line(s) /  an upstream channel-return path impairment somewhere.

There are other signal stat figures that can't be read by the modem. They are the "Upstream Rx Power" (Upstream Receive Power Level), the "Upstream SNR Ch." (Upstream Signal To Noise Ratio), and the "Upstream ICFR" (In Channel Frequency Response). These are as equally important in diagnosing connectivity issues as are the modem's stats.

I'm going to escalate your issue to the Comcast corporate employees that are available to these boards. They will be able to poll the CMTS to see whether or not everything is in the green zone, see your node / cable plant and modem health, and also see a history plot for the modem. You should get a reply here in your topic. Good luck !

Thanks! I appreciate it.

Hi there! We would be happy to assist you. Can you initiate a chat and start with your full name and address? To start a chat, please click the chat icon in the top right of the page! Search for Xfinity Support, if needed. Talk to you there!

OK I've done this - not seeing any response in the chat though.

So I wanted to follow up on this in the event that it helps others.

Issue - Motorola MB6800 that had been working fine would drop Internet every day or so once with LAG aggregation turned on.

Solution - MB6800 is not actually qualified for the 1.2Gbps service that I have (it is for other classes), and there seems to be an issue with LAG on it.

First of all, most of my interaction with Xfinity has been through the chat on this site and they genuinely stunned me with how good they were. They seemingly responded to me at all times of the day and night and had useful things to say and didn't waste my time going through 100 level call scripts.

I migrated from a Google WiFi mesh setup to a Netgear Orbi RBR750 that supports link aggregation (LAG). I enabled LAG on both the modem and the Orbi and everything was great with a Speedtest at the router showing 1400Mbps downstream. Unfortunately, every few days, the modem web console would become unresponsive and the Internet would then drop. Restarting the modem resolved it, but it was obviously annoying.

I had two techs come out to check the line and while a MoCa filter was added as well as a new grounding block and a new connector, I was still getting the same issues. I bought an Arris SB8200 seeing that it was DOCSIS 3.1 and supported LAG and when the second tech came out, we decided to try that modem out. That worked (but without LAG) for a couple of ours, then I started futzing with it to enable LAG. Everything blew up in my face at this point and I ended up going back the MB6800 and getting that re-provisioned (at around midnight). I did a modem reset, but was unable to get LAG working. I then came across a Reddit thread from February that described my symptoms. Long story short, the MB8600 seems to fail in the way that I've described when LAG is enabled. I don't know whether this is a firmware issue, but I then also learned that this particular modem is not qualified for use on the 1.2Gbps Xfinity tier.

Learning 1: The Xfinity device checker is worthwhile. Had I used it I would have realized that there is no qualified modem with LAG for my service tier. All the qualified modems have 2.5GbE ports, which is great but my Orbi does not unless I get the WiFi 6 version.

Learning 2: Maybe LAG is just a problematic and if I want the extra speed, I should get a router that supports multi-gig ports (or wait until they come down in price).

Learning 3: Just because your modem says DOCSIS 3.1 and you were fine on a different Xfinity tier doesn't mean you'll be fine on another tier even if the spec of the modem indicates that you should be. It may work but Xfinity support is best effort.

I'm probably going to replace the MB8600 with an MB8611 that has a single 2.5GbE port. It is qualified for the 1.2Gbps Xfinity tier and if I do upgrade my router, it will be ready.