3/12/20 - TL;DR - xfinity was autoprovisioning my modem for the 400Mbps tier even though my account has reflected the 1000Mbps teir for over a week.  This has been escalated to tier 3 support.  Today's Post

I ordered 1000Mbps service... the modem showed up, I installed it, activated it, changed to bridge mode... I was only getting 600Mbps via https://speedtest.xfinity.com/.

I have a newly built gaming PC hardwired to my router -> modem.  No issues transfering at 1gig between my machines on my LAN.  My speedtests to xfinity have been up to 950 at times but not solid... story follows...

Ticket #1 - I called in, was on for probably and hour going through the dialogue/troubleshooting... eventually after all the stuff we tried, the tech pushed an 'advanced config' to my modem and after a restart I was at 950Mbps.

Ticket #2 - few days later - same issue - stuck at 600Mbps - call in - 30 minutes of dialogue and was then assured the tech will fix all issues. They told me that my gigabit service was not yet activated... even though they shipped me a modem, I activated it and was at 950Mbps prior. They told me that 30 minutes later, I should be good after they were going to make some changes. I was not good later on... still at 600Mbps.

Ticket #3 - I called in again and explained everything that's happened so far, they ran a few tests... at that time they scheduled a dispatch.

Tech visit - He proved out all coax from my modem location to the curb. All levels good, running clean.  He even put on a pad to fine tune to get me closer to the middle of the acceptable range. He put his xfinity speed test device on the modem and only hit 600Mbps.  At that time, the tech swapped to another modem he had in his truck(same model as the other) and with his test set hit 950Mbps.

Ticket #4 - Chatted with someone... explained all of the above. They told me they'd escalate to level 2 and if I got disconnected, they'd call me back.... they didn't call back.

Ticket #5 - I called back in and they had no record of that call 15 minutes ago.  They told me I had the wrong modem... even though they provided it. Was on for over 1.5 hours and asked for a manager...  spoke with a supervisor... he verified everything looks good config-wise and said I have a Technicolor modem CGM4140 and that I should try their Arris EG1682G to see if the different modem fixes it... both are used for XFINITY XB6 it sounds like? A tech is coming out tomorrow to swap modems.

Anyone ran in to this 600Mbps issue and had it resolved permanently?

You are correct.  The United States pays more than anybody I believe and we have the slowest plans.

Kind of like California and it's gas prices.  We have some of the worst roads and the highest gas prices.

Anyways.  Node is still not fixed, but my speeds are still doing pretty good with the new modem.

I just ended up buying my own modem (Netgear CM1150V) self activation, now need to return their modem). Just tested with Orbi speed test and got 700mbps, not quite 980 but better that with the xfinity modem. So I will be dropping comcast once my contract is up with comcast and going to FIOS in December

It's not likely your node will ever be fixed. According to a comcast rep some years ago, he showed me that the node in this area was bad, but assured me unless something drastic happens to it, Comcast will never replace it because that would require them to shut off service for hundreds of customers all at the same time for at least several days. He said Comcast will never do that.

I heard similar about the node.

I was having the same issues and I bought my own modem (SB8200) and I'm problem free! 900+ on speed tests! There's definitely some firmware issue or thottling being done on the XB6.

I can confirm that in unbridged mode, 1GB service is working fine (around 900Mbps/40Mbps).  With the router in bridged mode, my speeds are around 500Mbps/40Mbps with the same setup.  Unfortunately, that means to get full 1GB speeds, I need to have multiple NAT, but it seems to be working fine for all home use, as well as VPN.  My setup:

Problem is still not fixed.  and MUCH MUCH worse.

After install 950Mbps,  switched to bridge mode as needed..  Cannot use this service in a double NAT.

Almost contemplated calling my exectutives office and thanking them for solving my issue. 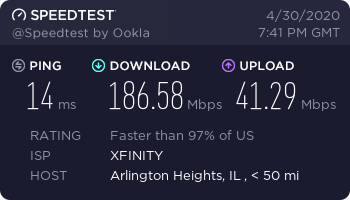 I wonder if we're all in the same area

Way later at night when most people are in bed a little after 2AM I got 917.60/41.27 as my best.  Which is what I was getting before I starting having problems.

When the upload on the node starts getting even more over loaded I get timeouts and major lag on websites and programs connected to the internet.

So far the XB7 is still working well for me, but will it last?

Trust me it aint the node.  otherwise doing a factory reset would net the same results in speed tests but it doesn't.   it goes right back up to 950Mbps.   Its the Modem/Provisioning issue.  I'm suspecting something between bridge mode and Router mode.   It reports back to xfinity different ways.  for example...  xfinity app still thinks im trying to control my wifi settings...   HA.... nope..   bridge mode is just that.   Just a modem.  everything else ive disabled.   I don't have the XB6 anymore to compare.  but digging around in the gui.   it looks to be the same cpu and memory.   What I do not get though.  is why 180Mbps vs the 680Mbps I got on the xb6.....   Something doesn't make sense at all.

BTW,,  I'll run another speed test off hours like I seen someone say.   2am. had better results???    im not sure if im staying up that late.  but something comparable.

I get what you're saying about provisioning.  And when my replacement XB6 much earlier this month worked great for a couple of weeks than all of a sudden did not. I truly believe that is a firmware or provisioning problem they're pushing on it.

I've only had my XB7 for less than a week and so far so good, but they may push something bad on it.

As far as the node.... the tech did show me that the upload on the node was overloaded which would negatively effect the download speed.  During the day when there is a lot of traffic in my neighborhood and in the eveninings I can see my download speeds go down and the upload is also impacted.  Late at night or early morning I'm getting full speed, at least full speed for me.

When I was on the XB6 both times I had similar high speeds than all of a sudden I cannot get past 650Mbps and even the tech thought they had me on the wrong speed plan.  He was confused.  When he was troubleshooting he checked the node.  So he knew that was an issue.  Not the main issue we've all been facing, but a separate issue for my neighborhood.

I'll continue doing speed tests to check to make sure my new XB7 doesn't get provisioned to a slower speed.

ok..  I think I may have found something.

I always disable IPV6 on my router equipment due to comcast changing prefix delagation willy nilly without informing clients.    had issues in the past.

with IPV6 disabled on router.   180Mbps. after hundreds of resets.   factory reset modem. 950Mbps for a day or so on bridge mode.

Investigating more.  But looks like it has something to do with IPV6