I have a strange one and hopefully someone has an idea where I should look.

I have internet and TV service from Comcast, and with the TV I have three TV boxes, two of them the X1 boxes and one small transport adapter.  Everything was working fine for years until last Friday.

Last Friday I turned TV#1 on and it's on ESPN.  That's the channel it was on last time.  I can watch ESPN on that TV all day long until I tried to change channel (to any other channel) and it will display a screen saying "We are having trouble connecting to the internet ...check your connections blah blah blah...RDK-03033".  I then turned on TV#2 and it's on CNN, OK tried changing channel, same message.  I then turned on TV#3 the one with the transport adapter, no issue there, I can change channels without any problems.

So TV#1 and TV#2 boxes will not change channel.  TV#3 with the transport adapter has no issue.  It complains about  connecting to the internet, yet the internet service is up with no issue.

I called Comcast support and went through the trouble shooting and they thought the issue may be loose cables, or defective boxes etc...so they restarted my boxes, and didn't solve anything.  If it's a cable connection issue I don't think I would be able to watch a channel - I just can't change that channel to another.  The issue is the same on both X1 boxes, no issue with the transport adapter, no issue with internet service.

They recommend that I change out the boxes.  So next day I went to a local Comcast center and replaced the two X1 boxes, went home, activated the boxes, and everything worked...for two days, then the problem returned.

I called Comcast again, and they wanted to restart my main TV box, I said OK go ahead.  So they are restarting my TV boxes, telling me it's 30% done, 40% done, 50% done, 60% done etc...and I have all three TVs on their respective channel, and none of them look like they are restarting,  I told them and they said it's strange you should be seeing a "Welcome" message.  I said yeah but no such message.

At that moment I logged into my xfinity account and I went to devices.  It says I have 5 connected devices.  Hmm five?  I have one internet modem, two X1 boxes, plus a transport adapter.  That's four, not five.  I then listed my devices and it showed I have 4 TV boxes and 1 internet modem.  One of the TV boxes is grey (ghosted) and the serial number is one that I returned many months ago (I replaced two old TV boxes with two X1 last year), and if I go the Status Center it says my main TV box is offline.  I wonder if this grey TV box which I no longer has is the main TV box which they think is offline?  Even though it's grey, I can click on it to troubleshoot and restart it?  I told the agent on the phone and they said they see 4 devices, but on my end in my account I see 5 connected devices.

Could this phantom device be the reason I am having issues changing channel on two of the X1 boxes?

When the agent restarted my box and she was saying it's 50% complete yet I am watching all three TV without restarting, could she be actually restarting the phantom TV box?

Anyone heard of this issue and any suggestion as to what else I can try?

The number one thing you should try is having a tech out. The X1 boxes need a clean signal to work and that error code means they’re not. The x1 boxes have an internal modem, so the internet connection message is referring to that, not your personal internet service. And the adapter doesn’t need a clean cable connection, as it doesn’t communicate back and forth like the X1 boxes do (why it had no problems).

Is there a bug with pictures?  I inserted photos and they did not show up in my last post.

Another image of pinched cable

Hi, thank you for the advice...BUT so far I have not been able to meet up with a Comcast tech at home.  I called the customer support a few times, and they have scheduled a tech to come out last wednesday from 10-12, but it was a no show, I had to go back to work, and at 1:30pm a tech called me saying he was on his way, but they told me 10-12.  I waited during that window.  I understand things happen, but it didn't work out.  So this weekend I decided to at least try and make sure all connections, inside and outside are tight and secured and there isn't any nicks or damages to the line made by lawn equipment or whatever.

I started the trace inside.  Removed and reconnected all connections at the TVs and boxes.  No difference.

I then moved into the attic, as I know I have two splitters up there.  Many years ago (probably 6, 7 years ago) when they put in the original coax line, I used one 1->2 splitter to split the in coming line into one for the modem, and one for the TVs.  Then the TV line is further split into three individual lines for the three TVs (two X1 boxes and 1 transport adapter).  I check those connections.  They are tight. 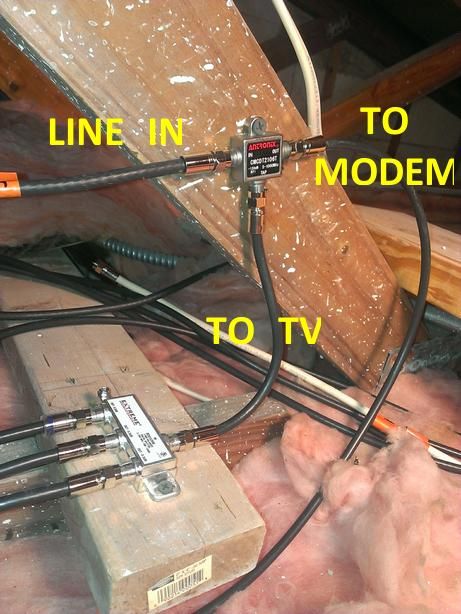 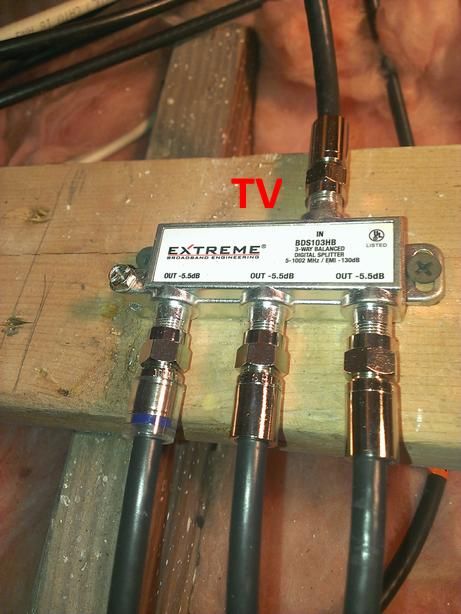 But one test I did do, is since I have no issue whatsoever with the internet service, I disconnected the line to the modem, and put that on the TV, and vice versa.  that should get the TV a better signal, and vice versa.  I switched the lines around a bunch just to see if there is a difference, NONE.  So I don't think it has anything to do with the lines after the splitters.  I then traced the coax line to the outside.  There I see a comcast box which I do not have a key for, so I cannot see inside.

But there is an orange color line that comes out of it that is buried in my yard, very shallow.  I pulled up the line and looked closed to make sure it was not damaged accidentally by a lawn mower or shovel.  Looks good.  I traced it all the way outside to the back alley where this orange line goes into a green comcast box.  This box.  I opened the lid. 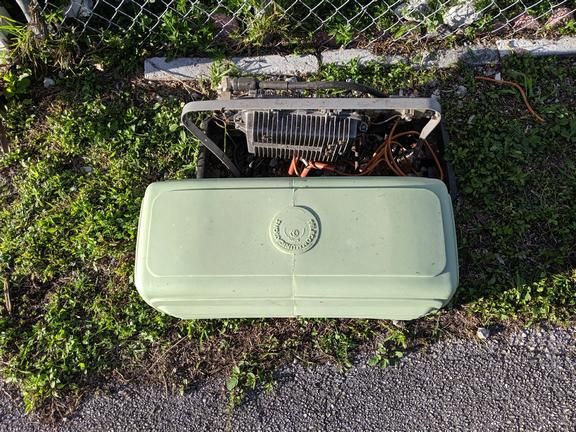 Now I can see where my line is plugged in.  In fact there are many other lines but none plugged in so I guess none of my neighbors are using Comcast?

The line from my house that is plugged in has a pinch where it joins the connector.  I circled in yellow where the pinch is. 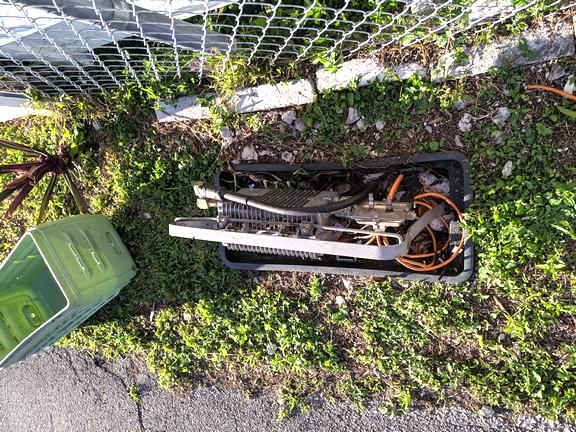 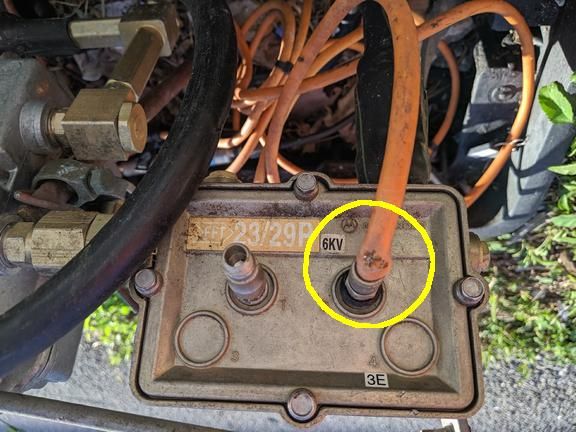 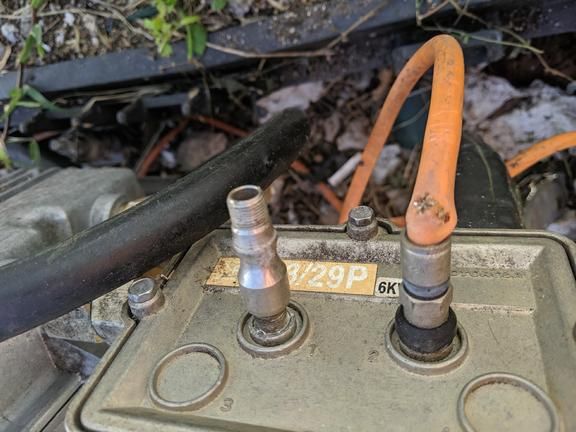 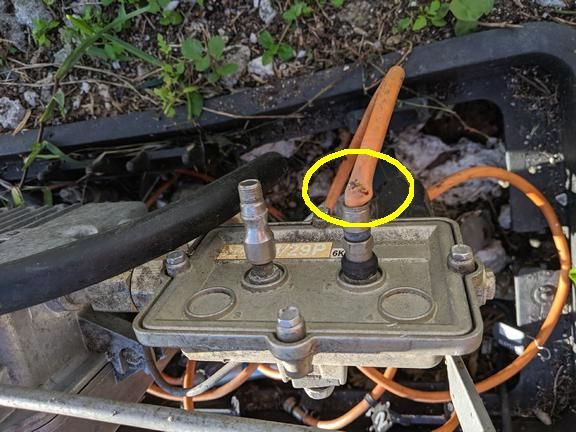 It looks like this pinch is right on the underside of the green cover.  A car hit that box or something bumped into it?  Don't know.  But this may be the problem?

So in order to verify this is indeed my line, I disconnected the line there.  Went inside and checked my TV and internet - GONE.  So this is my line.

Plugged it back in, and service came back.  Now I tried to bend it, twist it strained it one way or another at the pinch, and it seems to make a difference.  In fact, at one point, I was able to restart the TV boxes and get completed and connected messages instead of the "issues detected" that I have been getting for over a week.

Is it reasonable to assume this is the source of my issue?  Will cutting the line and replacing the connector be the solution?

I then called Comcast and said I found the issue can you please just send someone out to replace the connector and there is no need for me to take time off work come whenever you can...they said no, someone must be home, we need to schedule it.  Oh well.  I said forget it, I will just replace the connector myself.

Can I just use a standard coax connector and connect it myself?  I can do it in 3 minutes instead of waiting 2 hours+ for comcast  and may be no show.

I can’t recommend doing anything at the tap, you shouldn’t have messed with it at the tap in the first place. Regardless, if it works or not.

ah ok, in the forth post, I included links to two pictures showing the pinched cable.  I have a bunch more in the third post but I guess have to wait for approval.

Pictures are approved by admins

I started having the same problem across several tvs. I reboot which takes longer then normal and then it starts to work again. My system has been pretty stable for years. I have seven tvs with xfinity equipment. Thanks for posting all you did to fix it.

That is absolutely ridiculous...yet typical of the customer service experience I have had lately. Are you getting charged for these extra boxes? I got charged for my replacement boxes on my bill and had to get a credit (which they said was a “one time thing only”).

I consulted with a former Comcast employee, and he said that there's 4 layers to coaxial cable.
Copper core, white di electric, stainless steel mesh, shielding, black casing.
A low frequency signal travels along the di electric layer. If this is out of tolerance at any connection, it could be the cause of all the issues.
It's possible changing boxes was unnecessary.