Upstream Bonded Channels Power Level Too Low, How to Fix

I've recently bought the package with Xfinity that should provide ~300 Mbps download speed, however after setting up the network I found that my connections speed when tested was from 1-10 Mbps download at the most, not even to mention the upload speed which was consistently below 2 Mbps. This is incredibly slow and definitely not what I was paying for, especially when having faster speed is more important now more than ever with remote work. I called both Xfinity and my Modem company (Arris, My model for the modem is SBG6700-AC, which I was told should be able to support the speeds I had paid for) multiple times to try to fix the issue. I've spent more than 3 hours on the phone collectively on this. Arris says the issue is that my Upstream Bonded Channels Power Level is too low, below 45 dBmV (Mine are around 41-43 for the 4 channels I have). I checked all the other levels and they seem to be normal based on what the Arris representative told me.

What should I do? I called Xfinity to ask them to increase the signal power level but they said that they have set me up with a technician half a week from now when in reality I need this wifi signal as soon as possible. I'm also fairly skeptical that the technician will be able to fix the issue.

Hopefully, this helps for any other details needed: 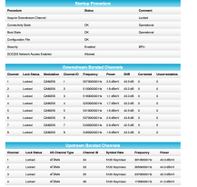 I'm not sure if the photo is popping up I believe an admin has to approve it first.

Per
https://www.xfinity.com/support/devices/#details
That device only covers up to 280. When you add a modem that isn’t compatible with your package, it defaults to a lower speed. Use the link to find something compatible. Also, your upstream levels are fine, Arris reps don’t know what they’re talking about