Just swapped our older XB6 gateway for an XB7 today (we got the Technicolor version if that matters).  Along with that I got rid of my 1st gen Google WiFi mesh and so am no longer running the gateway in Bridge mode.  Only other change was to swap out the cable from the wall and splitter with a brand new set from Comcast as the originals were 7 years old.  Previous to today, we had ZERO packet loss.  Now most speed tests are showing 0.5 to about 1.5% loss and if I use a packet loss test site it reports the loss is on the upload side.  I checked the signal values in the admin page and they all look within spec.  Is it possible the new XB7 needs a software update pushed or something?

Is this with a WiFi connection ? If so, for a test, does a computer / device that is hardwired directly to the router / gateway device with an ethernet cable have the same problem ?

With this test, we are trying to isolate this from being either a WiFi-only problem or a problem with the general connection to the Comcast system which would of course affect both. It's a good first step of troubleshooting before proceeding any further.

@EG Yes this is on any devices.  Tablets, phones, hardwired PC's, etc.  I ended up chatting with an agent via text in the app last night and they scheduled a service visit.  I've attached one speed test from my PC (hardwired via 2.5Gig ethernet to the 2.5Gig port on the XB7) that shows an example of the packet loss.  Even with that upload speed, running a Twitch streaming test (via the Twitch Bandwidth Test app) I was getting uploads bouncing between 5-9Mbps when it would normally be capped at 10000Kbps+ in that app (it shows 10000Kbps+ as the top speed once you hit 10Mbps).  An actual test stream was showing it bouncing all over from 1900-3500ish while I have the stream bandwidth set to 3500Kbps.  Packetlosstest.com shows packets dropping on the upload side. 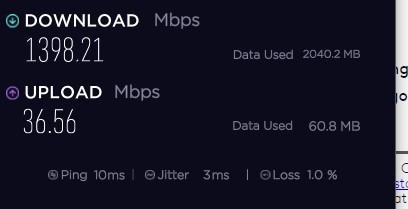 Going to monitor this for a couple days to see if I should keep the tech appointment scheduled for Wednesday or not.  As per my reply above this morning I was still having the issue though I received a voicemail from the support system that an issue in the area was resolved that may have been affecting me.  Perhaps it did actually fix it and just took a bit to get to me as since lunch time the issue seems to have gone away.  Definitely happy about that, but just being cautiously optimistic at this point.