My internet goes in and out every day - is there someone who can advise on next step?

This is a bit long winded and my apology, but I need to explain the entire diagnosis in more details, so please bear with me.

I started having problems with my internet & TV service starting December 2019.  Most times it's the TVs, will not let me change channels, kept saying ""We are having trouble connecting to the internet ...check your connections blah blah blah...RDK-03033" this issue is completely intermittent, and I can still watch TV on whatever channel it's on, but cannot change channel, and my internet connection is fine.  Going to the Status Center will show internet "Connected" and TV box status "Issues Detected".  Called and spoke to someone on the phone, was told to restart my modem, restart TV boxes, which I did, but repeated anyways.  A this point in order to make sure it's not the inside wiring or the boxes, I removed all my TV boxes and went to the local comcast center and swapped for new boxes.  No difference same intermittent issues.  Then I disconnected all my boxes, and switched them.  I have four lines - one for cable modem three for TV boxes, I switched them around and no difference.  Next I traced all the coax wires, tightened all connections, crawled through my attic and checked all the way to the outside wall box.  Everything looked fine.  Next I went from the wall box traced the line to the outside box in the alley, and found where my line connects to the outside box.  I *THINK* I found the issue.  Right at where the connection was made, my cable is partially torn/crimped.  It looks like a car may have hit the outside box, causing the plastic cover to deform and pressed on the connection.  Here is a picture of what I am talking about. 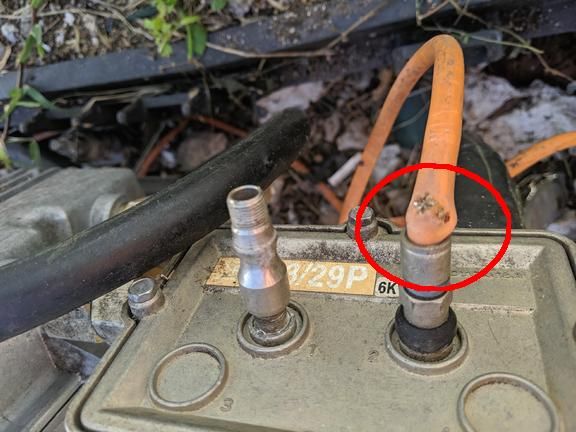 Once I saw this, I did some tests.  I had the TV on, and I can quite reliably simulate the issue by wiggling on the damaged portion of the cable.  I immediately called Comcast, and informed them I found the problem and the outside connection needs to be redone.  I was told I need to reset my equipment and they can send a signal.  After 15 minutes they said they see some issues with my wiring and I need to check my connections.  I explained I already did all that and I know where the problem is, so they told me they need to send a tech out to my house in a few days.

Unfortunately on the day I took off half a day from work the tech did not show.  I called Comcast and checked they told me they cannot see if they come to my house or not but most likely they came and did their job but did not enter the house.  I told them the outside bad connection is still  there so they must not have come.

After that call I no longer wish to rely on an appointment so I went ahead and bought a RG6 connector and replaced the connector outside myself.  The issue went away, for four months, not a single issue.

Then in April the issue came back, only this time the issue is more serious because the problem would occur more frequently, and now the internet would cut in and out.  Sometimes during my kid's online classes, sometimes during a web meeting for work.  So this is becoming more urgent and we are in the middle of a pandemic.

I called Comcast again on 4/21 and they did another diagnosis on the phone, saying there is an issue outside and they will send a tech out to investigate by 4/27.  I was given a CR number.  I had multiple signal cut out every day, and on 4/27 I called Comcast to see if anyone is coming, and I was informed by the person on the phone that someone DID come by and determined there is a problem outside, they need to change out an adapter but it's a special part they need to order it, and they will come back on 5/30 to replace it.  So that's good news, they found a problem and it's a part they can replace.

On 5/30 Comcast knocked on my door, he must be here to replace the adapter?  No.  He does not know about any adapter but he has a scheduled call to come investigate my issue. I told him my issue has been diagnosed and I am simply waiting for someone to replace a part.  He seemed puzzled and said he will trouble shoot again.  I explained the entire problem to him again, and he said he will check.  He then said he accidentally left his meter on all night and so he cannot check my signal and he needed to recharge his meter on my outside receptacle.  He then tried to open my Comcast outside wall box, it would not open I am not sure if he had the wrong key or what but he managed to pry it open brute force and broke the cover in half.  He then told me my issus is most likely due to a bad cable outside...most of my line is buried, and he said sometimes lawn mowers hit the cable and cause issues.  He will replace my line.  So he ran a new line from the broken wall box to the outside alley box.  Said this is most likely the issue.  He asked me to check if my internet was working and it was (but then this issue has been intermittent so that doesn't mean the root cause was fixed).

I asked again about the adapter replacement which was supposed to be done, except I have no clue what adapter it was.  He lauughed and said there is probably no adapter but the agent on the phone just made something up to get you off the phone.  He left and two hours later the issue returned.  I still have the same problem.  Rebooting the modem fixes it sometimes not other times.

So right now I am not sure what my next step should be.  Should I call Comcast again and wait on the phone for over an hour to report an issue again and again?  As a new issue or as a continuation of an existing issue that takes ten minutes to explain?

Can someone who knows more about the setup explain to me what may be the "adapter" outside they needed to special order?  Or is it true that the other tech said it's simply something made up?  The tech that came said there is no adapter and all I need is a new outside cable and now I have a new orange cable hanging over a tree and over a fence gate, but I think my old buried cable is fine, should I just reconnect my old cable back since this one is unburied and doesn't seem like it was the problem?

I really need some advice on how to move forward.  It seems they knew what the problem was but then no one knew who was supposed to do what?

xfinity needs to come out and change that.  for a cable company that peice is NOT a special order.  It is something that they have on hand in every vehicle.  You can go and buy it yourself even at a store that carries items like that.  We too are having connectivities problems, but ours are going round and round as to what the fault is.  I bought a whole new mesh router system, it is not that.  I had a remote tech checking my hardware on my modem.  It is not my modem.  The issue is Xfinity.

We have been having the exact same issues for 2 months. Have you had any resolve?

Please create a new topic of your own here on this board detailing your issue. Thanks. 10 month old dead now being closed.