Internet slows to 0.5Mbps, randomly and frequently throughout the day

I’ve been having an issue with my internet where it randomly becomes extremely slow multiple times throughout the day. Some days far worse than others to the point that it’s practically unusable. In these moments of slowness if I run a ping test to the first hop outside of my network on my trace route it takes upwards of 5000+ms round trip for sometimes 30 seconds and other times several minutes of this until it calms down and becomes somewhat fast again.

It started a couple weeks ago so the first thing I did was replace my customer owned cable modem with another brand new modem because my current modem was listed as ‘incompatable’.

This did not fix the problem.

I contacted tech support, they sent a technician to check the wiring (the modem is installed outside the house in a weatherproof enclosure 2 feet of cable away from the ground block because techs will not come inside).

The tech replaced all the cable ends and ran a speed test with his modem and it passed.

The problem continued (as it is intermittent and he didn’t catch it while he was here).

I then tried to get tech support to give me tier 2 support, on one of my many calls they did and they told me they saw 4,000ms latency while pinging the modem. The next time I called in I was told I couldn’t get tier 2 support unless I rented a modem as they would not diagnose trouble on a customer owned modem.

So I rented a modem (now my 3rd modem in a week). The problem persists.

I have tried connecting directly to the modem (without the router in between) with brand new computers, All hardwired, Even the connectivity test built into the xfinity modem fails, returning only 3 of 4 packets in the ping test when this problem manifests itself.

It seems it could be some sort of interference on the line that comes and goes throughout the day. Rebooting the modem seems to make it better sometimes and worse other times.

I’m at my wits end at this point and don’t know what to do, they sent two techs out the first replaced the connectors, the second just looked at what a nice job the first one did, but I believe it’s possibly an ingress problem because the signal levels (per the tech support folks) are all good - and since it’s intermittent I have a hard time getting someone on the phone while it’s still happening. I’ve spent 8 hours at least so far on hold and on the phone with tech support this week.

Another thing I didn’t mention in the original post is that these random slowness periods happen 50-100 times per day and when they happen social media comes to a halt, loading webpages stop (because everything times out) and streaming video - forget it. Also if I run a speed test to Speedtest.net (selecting the closest Comcast server) I get about 1M down and 0.5M up when we are signed up for 600/15 service. The same results if I use the xfinity speed test tool, and as I mentioned the modem itself fails it’s connectivity test returning only 3/4 pings in the ping tester.

Yanno this sounds exactly like my issue. Good luck working through tech support in Manila. You won’t get anywhere, and when you do it will be some angry lady from Kensington in Philly that’s holed up in her house and too entitled to pass you to tier two.

Update: a tech came today and replaced the cable between the modem and the street. The problem did not reappear for several hours, but now it has returned and everything is crawling. 0.3Mbps downstream. Everyone jumped off WiFi. Pings are 600ms and have been for 23 minutes now.

That round of slowness lasted approximately 30 minutes before recovering to normal speed.

Currently experiencing a mild version of this slowness, here is what it looks like in PingPlotter.

Another slow period that lasted a half hour.

I have been having a similar issue - speeds slow to a crawl, pingplotter shows extremely long ping times. I was getting upwards of 6000ms round trip. Tech came and replaced the wire from street to house yesterday, this is one of today's slowness periods. These last anywhere from 30 seconds to 30 minutes. I have replaced my modem twice this week, the first time with another customer owned modem, the second time I rented one (which is what I have now) because I was told that I can't get tier 2 support with a customer owned modem. Tomorrow is Monday, I expect that this is worse on weekdays, but now that I have pingplotter running I will be able to confirm. I am in Southern New Jersrey. All devices slow to a crawl, speed tests show 0.5Mbps when this ocurrs, videos buffer, wife and kid get angry, I can't do my job.

I already replaced the modem twice (latest modem is an xfinity rented modem), had three techs here, the most recent visit they replaced the wire running to the house, all modem signals look good when viewed via the modem GUI. Here's what happens and it happens all day long.

Sometimes 30 seconds worth of this, other times 30 minutes, and some days are far worse than others. Today is one of the bad days.

Similar issues.  Speed suddenly drops from 200MBPS to 1 or less than 1MBPS.  Please see the screenshot.  There is no pattern or behaviour that I could trace that helped me.  Customer Service is nice to listen to the problem but they dont have much options other than restarting modem. 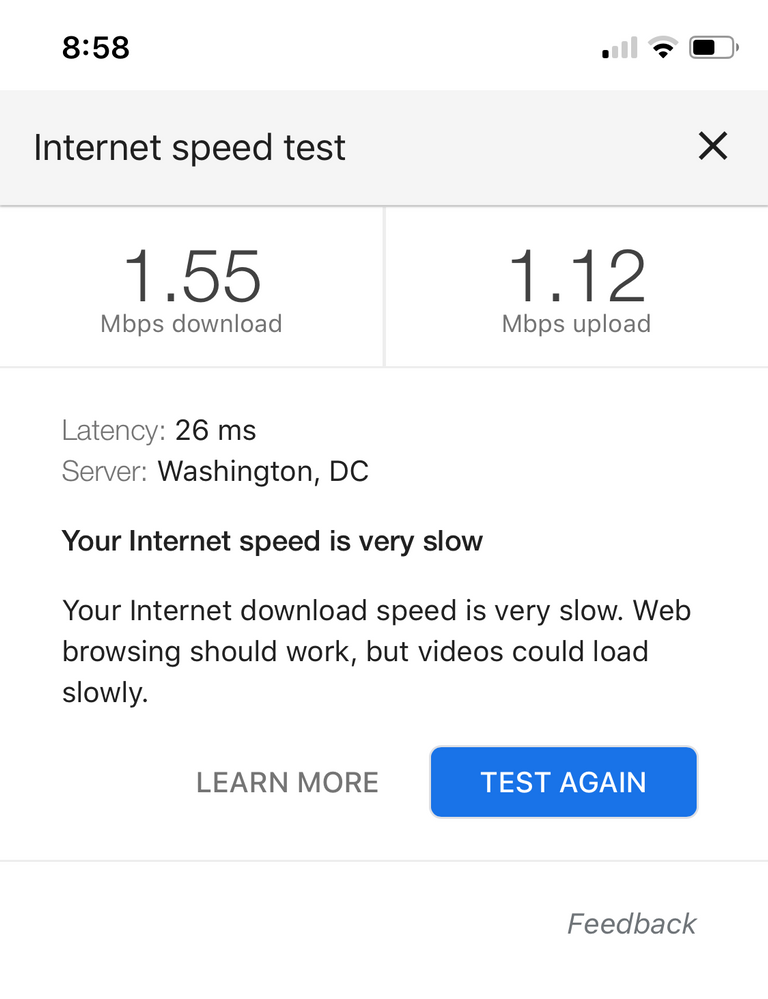 Problem continues. Falres up randomly, seems to be more prevenalt on weekdays, will continue posting updates. I see someone here was able to combine two of my threads into one, but were unable to answer me. That was nice.

I am having the same exact issue. Was told there was an issue outside of my house in regards to the lines coming in. They sent a tech out about a week ago and he fixed the "telephone line issue" ? I had no idea what they were referring to but I had hoped it would fix my problem. It didn't. Called them back again today after waiting a week for them to call me back (was told to wait 48 hours) and was told a technician will "call me to discuss my problem within 48 hours". Fed up with this, about to switch to frontier (which is apparently just as bad, but maybe they'll at least actually fix my problem instead of shuffling me around/ignoring me).

Are you able to check the error log on the modem and the signal levels during these periods?  please post this information as it may help in diagnosing the issue

Whoa! Other than not trying an xfinity modem, having a different speed package (350/20), and not having support come to our complex... this IS my problem!

I work from home as a systems admin & web developer. I’m in CT, near Hartford. I’m running daily speed tests, so I can have my speed history archived for Comcast. It’s previously been fast enough, but typically not what I pay for.

I noticed the speed problem around the time the state issued the stay at home order. I originally thought it was going to be a temp issue, as Comcast reinforced their infrastructure... but it’s only gotten worse.

I find it very odd that it will usually bounce right back to normal speed after a reset, because .25mb would imply (to me at least) that there’s something more seriously wrong.

Yesterday, I started receiving several “page unavailable” notices, where it would then refresh itself and load the page. I figured... hey, maybe it’ll be slower speeds, but at least the xfinity hotspot would be consistent speeds.

Anyhow, same issues there (yesterday). This was on multiple computers and after restarts. Today seems better on that front... but made me realize that this cannot be something on my end. Yesterday’s experience made me feel confident it wasn’t, so I looked to google for others with this issue.

Omg I am not alone! Had 300/20 pkg with Xfinity. Netgear cm700 and eero WiFi. Slow downloads and uploads
Had a tech come out last week- said the wiring was fine. Because I don’t have an Xfinity modem/router he said he couldn’t diagnose my system from the inside. Went out and got a Netgear CM 1000 and a Google Home Wi-Fi. Upgraded to gigabit package. Downloads aren’t too bad. Averaging around 500 Mbps. The problem is the uploads. Averaging 1 to 2 MbpsThat’s my real problem. I have large video files to upload and I have to go into streaming platforms. My signal is always kicking out. Xfinity online support only says to restart the router and run a speed test. They are no help. So frustrating. Don’t know what to do at this point

Same problem here. Download speeds seem to be normal most of the time but upload for me is even less at around 0.1 Mbps and less. Talked to 3 people on the phone and had 2 extended chats with customer service altogether at least 5h effort. I even got a new router and new modem which did not change anything. My modem now has 31 downstream and 4 upstream all with good power and SNR but internet is not usable, websites won't load and connections time out. The only thing they had me do like 100 times was to reset the modem which I did over and over again. They told me twice someone would go and check here within 24h and let me know but have never heard back from them, I even have the ticket number and everything... Very frustrating!!!