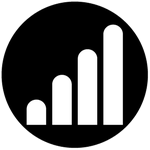 So we have been having trouble for a while now it recently got worse so we called Xfinity and got a new router. It got a little better but not much. It currently goes out about once a day, we restart it but it's not that. You can restart it multiple times and it won't connect, it seems more like the general connection is cutting out. After the new box didn't help we called them to send a guy out and we're not sure if they did, they said the guy would come on the outside first and try to fix it and if that didn't work he would come inside. There was no note and our problem is inconsistency, it could have worked while he was here. The connection is sometimes out, sometimes 0.45mbps (DL), and sometimes 30mbps. What do we do? Having someone come out is the farthest option Xfinity gives us.

Background Info if it helps:

Xfinity says there is no outage but it also thinks we're on the north side when we're right on the edge and it says our neighbor is on the south side, I doubt they ran a connection for each side down our street.

The only thing that has changed other than the box is that we have slowly gotten more "Alexa"'s but we only have like 15 devices according to xfi. I was thinking maybe it has something to do with 4g being a single ping system but I would assume even a home grade device could support that consistently.

Ping is never higher than 38ms.

Until very recently I had an ethernet connection.

I use Ookla and generally upload doesn't get very low even when download dips to 0.24mbps the upload was 2.59mbps.

Ookla does save tests if that helps.

Connection to the router is never the problem.

@TinyGiraffes wrote: ... I wanted to mention I have tons of errors like one device has over 3 million "uncorrectable codewords". ...

The downstream power levels and SNR are way out of spec (too low). Problems like this are often due to poor coax connections or damaged coax cable, usually in or near your home.

If you can't correct this using the Internet Troubleshooting Tips, you'll need to try once again to have Comcast take care of it. Call them at the phone number on your bill or 1-800-Comcast, or use one of the options on https://www.xfinity.com/support/contact-us/. Insist they send a tech out to identify the cause and correct it.

If the tech finds bad coax, splitters, amplifiers, or connections in your home (even if Comcast originally supplied them) you'll probably have to pay for the visit unless you have their Service Protection Plan (https://www.xfinity.com/support/articles/service-protection-plan, closed to customers that don't already have it). If the trouble is due to a faulty Comcast rental device, or anything outside your home, you shouldn't be charged.

Please post your modem or gateway stats as per Internet Troubleshooting Tips .  If there's an issue with signal it might be seen there. 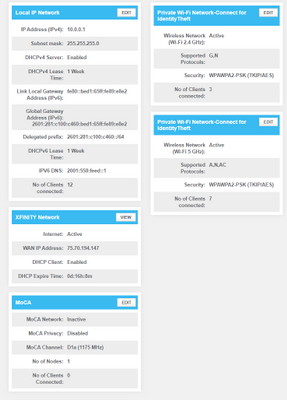 I added The general status page too, I don't think you were looking for that but you say "stat" and I don't want to waste your time. Thank you for helping!

These aren't showing up either so I put them on Imgur just incase.
https://imgur.com/MT2DkEu

The error log, It's 4 pages of the same port mapping notices.

I wanted to mention I have tons of errors like one device has over 3 million "uncorrectable codewords". 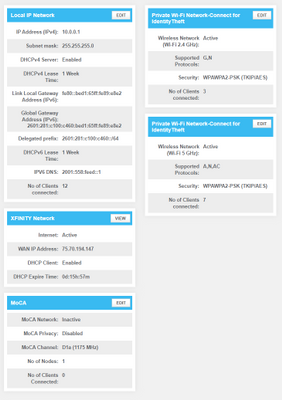 Thank you, I don't know if this will fix it but we're about to paint our brick house so all the coax cables are on the outside and this is a good reason to just rip them off and replace them, considering we moved router anyway. From what I could find between amazon and commercial manufacturers it looks like 75 ohm RG6 is about as good as it gets. Would you agree?

That's the standard coax for runs from the ground block into the home, yes. If possible, you might try connecting a known good cable between the ground block and your gateway. If the levels and SNR are still out of spec, you'll need to get Comcast back out to track down the problem.

You should check your upstream channel levels too. They may be out of spec as well.

Well, the previously mentioned connection levels are still a little out of range at -10 to -15 but I guess it doesn't matter because 205mbps dl.