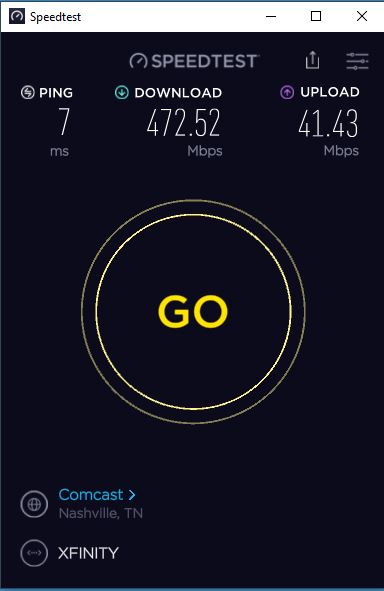 I'm at a loss to explain why I'm not getting the plan's reported speed.  I think I've isolated just about everything on the system except changing out LAN card in desktop but I'm thinking that's not it since I was briefly seeing 700-800MB before it dropped back down to 320-380MB.  Coax cable from tap on line to modem - check (good - no interference, no power drop, per Xfinity Tech).  Cat 6 - check (good, tried two different ones).  Modem - Check (three different modems, three different manufacturers).  Power levels in spec - check (Xfinity Tech confirmed).

I'm at a loss to figure this out.  Hopefully someone will have an idea.

Greetings, @BobH2015! I hope your week has been treating you well. Thanks so much for taking a moment out of your busy day to leave a post on our community forum. I'm sorry to hear you're having issues with your connection speeds, but you have definitely come to the right place for assistance. Out of curiosity, what kind of speeds are you getting over WiFi? Is it any better than the LAN speed, or about the same?

Same issue here. I have the SB8200 and have tried everything. My guess is the boot file.

Recently started having slow Speeds on Gigabit,  Contacted Comcast Support on Reddit,  on Wifi Ax on my XB7 Gateway, previously worked fine, average around 737 download and 41 for upload,  yesterday was getting 90-100mb,  link speed was like 113 at one point,  Phone was only at 144mbps for link speed for My Galaxy S20 FE 5G phone,  Now that they somehow got my Gateway on Wifi AC mode, it's holding Link Speed at 866.7mbps, which is better than yesterday

But Heck i pay for Gig Speed, i expect to at least sorta get close to Gig Speed, I know alot of wifi around here,  wiring up this Desktop PC soon as i can get some Flat Ethernet cable, hopefully i get Close to Gig then

If for some reason can't provide Gig speed in this area, i'd least like a Credit for the bill, as it was working just fine up til recently, i don't know what the heck changed,  not my fault if neighbors got a newer router and broadcasting too much on 160mhz or whatever,    just moved into this Complex in November 2019,  worked perfectly fine on Gig from July 2020 on--til now

@bikeman017 Thanks so much for taking the time to reach back out to us regarding your slow speeds over wifi. I know how frustrating slow connection issues can be especially when you feel like you are not getting the speed levels that you are paying for. Have you been able to test that connection over an ethernet to see if there is any kind of improvement with the connection?

@ComcastJamesH Sorry, forum notifications went to spam and just seeing your note.  Getting 399 Mbps down and 39.1 Mbps up on Speedtest.net app on iPhone 12 Pro.  Following this on phone, got this on desktop (ethernet via Netgear R6700v3 router):  Ping 7, 352 Mbps down, 41 Mbps up.  Sent the Arris SB8200 back to Arris for a warranty replacement.  Should be back in hand today or tomorrow.  My plan is to see if swapping it out again for the Netgear CM1200 makes any different.  If not, the SB8200 goes back into service and the Netgear back to Amazon, followed by another call to Comcast to get this sorted out.

@steagallcraig That's what the tech on the phone said when the Comcast tech was here.  "Our advertised speeds are based on testing on our equipment.  Your SB8200 might not hold the whole boot file."  Kinda made sense until we used the Xfi modem/router device from Comcast.  I kept it for 3 days on the off chance that firmware updates might take 1-2 days to push, checking speeds at various times during the day and night - about the same speeds as the SB8200.  Got better speeds with the Netgear CM1200.

@Bobh2015 I have a IPhone 12 pro max , one thing i have found, its distance sensitive, close to the router, amazing speeds, about 20 feet away speeds cut in half, also i have found the bandwidth setting on your router has to be tailored to your environment for the best wifi, more is not always better

@BobH2015 I did the same thing with my SB8200, sent it back for warranty. Got the new one up and running, same issues of slower speeds than normal. Of note.... when the modem had the original boot file, my speeds were incredible. I was getting close to 1GB wired and 820mb wireless with my S21. The update gets sent and my speeds go back to 800 wired and 620 wireless. My guess is you might see a difference when you get the new SB8200, but once it updates to the new boot file, it will go back down. Also, pay attention to your upstream power levels with each version of the boot file. I know it seems crazy and everyone on this board will tell you it doesn't work that way..... my speeds dropped when the power levels dropped. Keep us posted, I have seen this issue for a year with nothing resolved.

@steagallcraig I'll post the results and the power levels I see.  I'd love to see 800 Mbps wired.  My speed spikes briefly to ~700 Mbps then consistently drops back into the 300-500 Mbps range.

Good morning @BobH2015, our team would be happy to investigate your connection concerns. Can you please send a message to Xfinity Support so we can run through some troubleshooting steps and take a closer look at your equipment and signal levels?

@ComcastAlyssa I'll try to do in a bit, after conference calls.  I can't take down my network (two WFH people on the network) with modem resets, etc.

Thank you so much for your response @BobH2015 and we completely understand! Please send us a private message at your earliest convenience so we can better assist. We're available here 24/7 and happy to help whenever you are ready!

Glitch in Xfinity Forum!  When I pulled this back up, I got a screen asking me to confirm my registration.  It WOULD NOT accept BobH2015 as the User Name.  The instructions said "Three characters with upper and lower case, numbers and special characters" and any attempt to use "BobH2015"  was rejected.  Similarly, three character user IDs were also all taken.  I mistakenly listed another user name and it's now set with that brintonh.

I got the same message, i just agreed and all is well, but i dont have those characters

Tried everything, including just accepting and no go.  Ended up with a new ID.

where did my comment go? @brintonh i responded but looks like they took it down or it didnt post. i will get back and explain when i get time from work.

@steagallcraig Sent you a DM.  I see that your message isn't here but it was in my email notification.  Sounds like your issue is the same as mine.  Tech changed every fitting, ran a new wire from pole to tap at back of the house.  Checked speeds and power/noise levels at every point, including at the modem (i.e., disconnected coax from modem and hooked up his device).  All levels were great, no noise on the line (my modem line is a direct off the splitter at the back of the house - no cable TV on the line) so he wasn't sure what the issue was.  Got another tech on the phone who suggested the boot file issue with the SB8200.  But as I said to one of the Comcast support folks above, I've now used 3 modems - SB8200, Xfi Gateway and Netgear CM1200.  By far, the Netgear is getting me the best speeds.  At the time with the tech visit, I had both the SB8200 and he brought in the Xfi from the truck.  Both had almost identical output in the low to mid 300's down.  Both got ~40 up.