Constant dropouts requiring modem reboot whenever devices are unused for a while.

We have two desktops and a Unifi wif-fi acces point hard wired into the modem. A few months ago, after a days long service interruptionwe were told someone had "shot the neighborhood distribution box" Sounds like a convenient excuse but it is Chicago after all. Since that time we have had to reboot our modem several times a day when trying to use the desktops, especially if it was inactive for over an hour. This problem also happens with the wi-fi gateway. Devices that are in continuous use retain their connection until you try to use a different program requiring internet....for example, I can play several hours of online games with no apparent hiccups, but as soon as I finish and immediately boot up Chrome or Firefox, the same desktop shows no internet connection.

Modem down/up below. Any ideas guys? 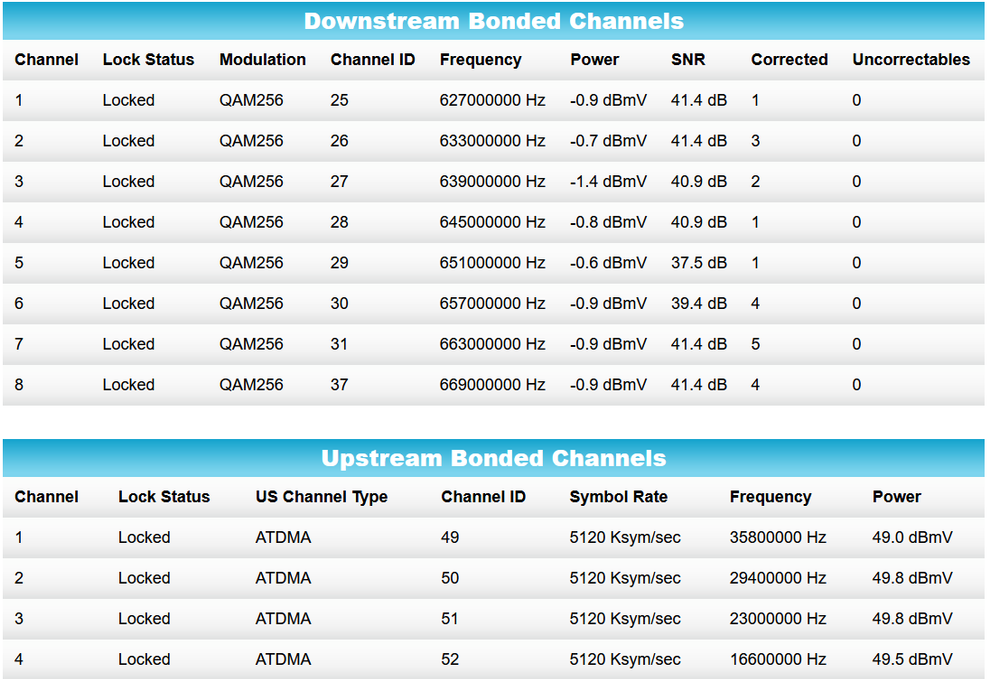 Guess there's no ideas then.

The upstream power is on the high side and it may be intermittently fluctuating even higher to out of spec levels. That can cause random disconnects, spontaneous re-booting of the modem, speed, packet loss, and latency problems.

In a self troubleshooting effort to try to obtain better connectivity / more wiggle room, check to see if there are there any excess/unneeded coax cable splitters in the line leading to the modem that can be eliminated/re-configured. Any splitters that remain should be high quality and cable rated for 5-1002 MHz, bi-directional, and no gold colored garbage types like GE, RadioShack, RCA, Philips, Leviton, Magnavox, and Rocketfish from big box stores like Home Depot, Lowes, Target, Wal-Mart etc. Splitters should be swapped with known to be good / new ones to test

If there aren't any unneeded splitters that can be eliminated and if your coax wiring setup can't be reconfigured so that there is a single two way splitter connected directly off of the drop from the street/pole with one port feeding the modem and the other port feeding the rest of the house/equipment with additional splits as needed, and you've checked all the wiring and fittings for integrity and tightness and refresh them by taking them apart then check for and clean off any corrosion / oxidation on the center wire and put them back together again, then perhaps it's best to book a tech visit to investigate and correct.