So to preface, I'm very familiar with networking and I've tried all the troubleshooting that I could think of on my end before reaching out here.

LEAD UP TO THE CURRENT ISSUES:
I just moved and transfered my service, and the tech came out and setup my internet and replaced my XB3 to the XB6 when the tech was setting up my internet.  We tested the speed while the tech was there, and at the time I was on the 250mbps plan, and had no issues.

About a week or two after the internet was setup, and I was all moved in, I decided to check out faster speed offers, and ended up upgrading to the 1000mbps plan as I now had the XB6 that is supposed to support said plan.

(TO CLARIFY, I'M NOT EXPECTING 1000MBPS DOWNSPEEDS, BUT I SHOULDN'T ONLY BE GETTING HALF OF THE MAX)

ISSUE #1 (WIFI DOWNSPEED HALF OF WHAT IT SHOULD BE):
Currently using 5GHZ on my thinkpad p52, my NVIDIA Shield 2017, and various other 5GHZ devices, I average a downspeed of only 415-485mbps as show below: 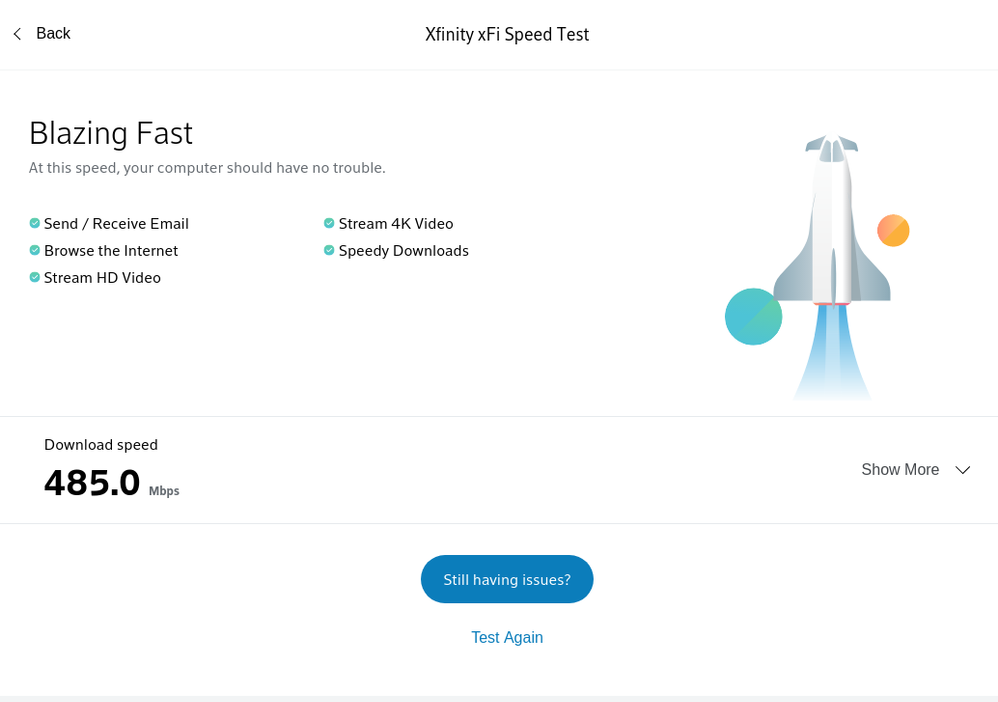 ISSUE #2 (ETHERNET CONNECTION CAPPED AT ONLY 90mbps down)

I've tried testing ethernet speeds from the XB6 over cat5e and cat6 ethernet cables and they seem to be capped at 90mbps for some odd reason (The ports on the XB6 are flashing green, not orange so it's not setting it as 100mbps).  I have done a factory reset on the XB6 and this still has not fixed the issue.  I get the same results on my NVIDIA Shield ethernet, my Thinkpad P52 ethernet, and various other ethernet capatable devices.  So it's leading me to believe that there were multiple provisioning issues after I did the internet speed package upgrade online, and also that the tech did not properly provision my upgrade from the XB3 to the XB6.

For some strange reason my xfinity account shows that my device is still the XB3 when my xfi app is showing that my device is the XB6, so this again leads me to believe that the provisioning of both the XB3 to XB6 upgrade and the faster internet package upgrade have partially failed to complete or sync.

I wanted to make sure that the image wasn't just a standard default image to represente all routers/modems, so I verified the URL and image meta data.  It shows that the image uses the specific XB3 device name, leading me to assume that xfinity is indeed assuming I still have a XB3 setup on part of it's system:

I WOULD LIKE THE FOLLOWING TROUBLESHOOTING TO BE PERFORMED BY XFINITY:

***AS THIS IS MY FIRST POST, I ASSUME THERE IS A POSSIBILITY THAT MY IMAGES ARE NOT SHOWN, SO TO BE SAFE I PUT THEM ON MY DROPBOX***

@ComcastMorgan  I saw you had experince helping run a node healthcheck to another user who has a similar 90mbps downstream issue via ethernet so maybe you could help?

***ALSO IF I TRY RIGHT NOW TO UPGRADE AGAIN TO ANOTHER PACKAGE, IT SHOWS THAT I NEED TO UPGRADE MY DEVICE....I AGAIN HAD THE TECH TAKE MY XD3 AND INSTALL A NEW XD6 WHEN HE SETUP MY INTERNET AT MY NEW ADDRESS.  I ONLY HAVE SERVICE AT ONE ADDRESS, SO MAYBE DURING THE ADDRESS CHANGE THE ACCOUNT DIDN'T GET PROVISIONED PROPERLY?***