33Mb down on new install paying for 600M

I did the self install on xfi xb6 modem.  Well the tech (contractor not comcast) that dropped off the self install kit did something outside to the lines and then helped me set up the modem inside.    Since the install I have only been getting 33Mb down but it is very consistent.   It does not go faster and it doesn't spike for a few seconds then slow down or anything.  The spped  just kind of reaches 33 and stays there.  Upload is 17 and the speed is the same wired or wifi.   So, the connection is good, but it seems like there is an arbitrary cap at 33 Mb for some reason.  Chatted online with tech 2x and they finally sent a Comcast tech out.  He went to the box outside and looked at what was done and said it wasn't correct and needed to be grounded and overall wasn't installed right.  He was kind of rushed and said he did all he could but didn't elaborate.  After the visit, there is no chnage and I'm having the same 33Mbps/up and 17 down.  Time of day doesn't matter either so it isn't internet traffic.   It seems like something on the account side capping the speed.  Whatever the first tech did also impacted directv which isnt working now.

Help please....   I tried to post the signal/power info, but it isn't showing up for some reason.  I can do that tomorrow if helpful. 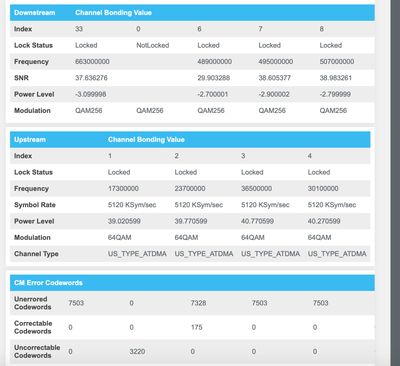