Everywhere I go Xfinity Mobile is slow unless connected to WiFi. I bought a new iPhone 11 when I signed up. Why is it so bad? I get around .45 Mbps with 169ms latency.
I can be sitting next to my lady who has Verizon prepaid and her 8 year old android dual core dinosaur out paces my iPhone 11 when it comes to data speeds. This is unacceptable. I’ve been with Xfinity Mobile 4 months and hate it. But I still have over $600 to pay on this iPhone. I need out of this so I can switch carriers. I would rather get a $40 Android from AT&T prepay

I was surprised to find in my area, the xfinity mobile LTE speed was 120/40 Mbps (tested with speedtest app in iphone 8). I didn't believe it, so went back to the same location and tested again after 2 days. It was still the same. (This info is more of FYI). 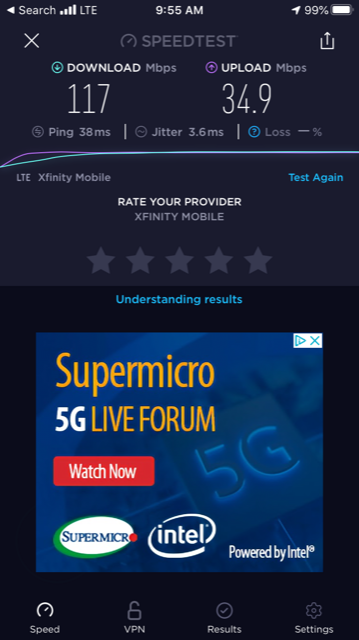 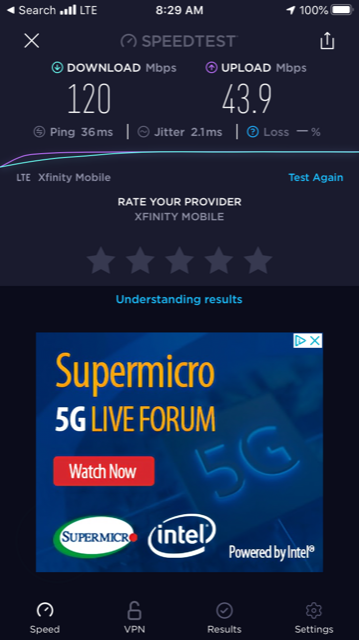 I travel a lot and have the same issue.   At times it is so slow and unresponsive, we cant even use GPS.   We have two phones, one on the unlimited and the other on the by the gig plan.  One was BYOD that I brought from Verizon and the other is new on the payment plan.   I have even added the HD Pass.  Coming from Verizon, I know what the speeds should be.

I have tried the online chat and called SEVERAL times.    Their answer is to use Asurion (paying the deductible) and replacing my payment plan phone, even though it is under warrenty and there is no indicator that it is the phone (aka, both phones are doing the same thing).   The problem is they started telling me this within a month of switching.  When I say that is not acceptable, either they just leave the chat or someone we get "disconnected", EVERY TIME!

I am getting close to the end of my payments and now looking to switch away from xFinity.  Their support is BEYOND awful and at this point, I believe they are intentionally restricting internet speeds.   I can have a full (5 bar) signal and unable to use the internet.

Xfinity mobile uses Verizon network for the cell service (not talking about WiFi hotspots) and it is Verizon who is throttling bandwidth of Xfinity mobile. They give priority to their customers first.

I have Verizon and XM and XM for me is usually just as fast but with a little slower ping times.