I've tried Safari, Firefox, and Chrome, but nothing will get the page to show where I can enter #s for forwarding.  Any advice most appreciated. 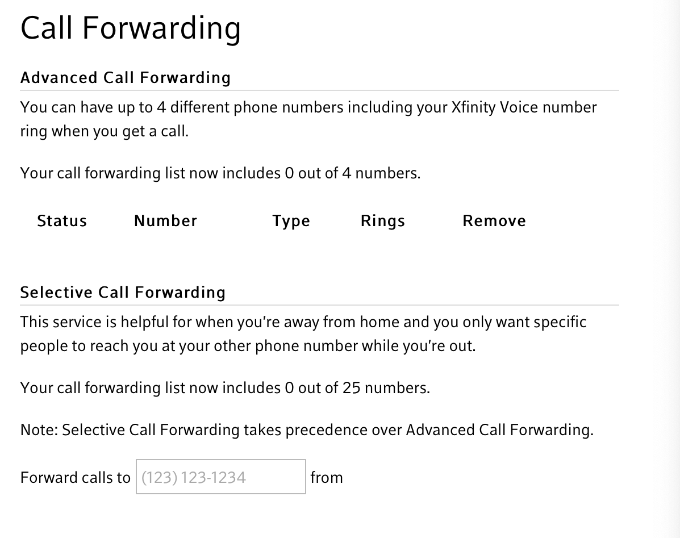 Hello, @HFTobeason, I appreciate the details and screenshot you provided in your post. I get where you're coming from, that is a really clutch feature to have. I want to make sure I'm understanding you correctly, are you saying that the call forwarding page is incomplete or cuts off? Also, if you're not already, please use this link for a complete walkthrough for call forwarding details: https://comca.st/3nL8nSt.

@XfinityMarcos Thank you for your reply.

Sorry if I wasn't clear.  The issue is that, as shown in the screenshot I posted, the Call Forwarding page never renders any input fields for Advanced Call Forwarding - I cannot input a number to forward my calls.

I have followed the instructions at https://www.xfinity.com/support/articles/forward-calls-with-call-forwarding.  It's the step here that is impossible:

Because the page does not render that input field.  Here's a better screenshot of the entire page in question:

You can see that no input fields are rendered under the "Advanced Call Forwarding" heading.

Maybe I'm doing something wrong?  As I mentioned, I've tried with Safari, Firefox, and Chrome - all on a Mac.

Thank you for reaching out to the Digital Care Team. I hate to hear this has been your experience and would love to investigate this for you! Please send us a PM with your first and last name, as well as house numbers to your service address. To send us a Private Chat Message, select the message icon in the top right corner and then search for Xfinity support. With our new Xfinity support chat, you do not need to input the name of a person. Just select Xfinity support and you will be able to speak with the next available specialist.

I've had several calls to Xfinity regarding this problem. They always say it's fixed and it never is. Why have this feature if it simply won't work? How about paying attention to your clients?

Thanks for reaching out to us here as well about this issue.

Has your experience with the advanced forwarding page been exactly the same and would you be able to post a screenshot as well?

If this is an ongoing issue, it will help to get examples from as many users as possible so we can have this looked into. :)

First, XfinityMarcos, XfinityHeather and XfinityTambrey, thank you for trying to help with this issue.  I don’t mean any disrespect to any of you.

However, this is going no place.  The problem is not a misunderstanding on the part of the customer.

My biggest problem is with this claim:
“If this is an ongoing issue, it will help to get examples from as many users as possible so we can have this looked into. :)”

Again, I understand the person saying this is just trying to be helpful.

But in terms of it being an ongoing issue, it can be determine just by searching this forum for the thread I created a *YEAR* ago titled “Error with Advanced Call Forwarding”

The thread includes examples from many users and yet Comcast never escalated the issue.  Again, this isn’t a customer side issue, this is a problem on Comcast end, specifically with a system referenced as “ott.comcast.net” and there has been no method to get the problem escalated to the administrator or application programmer of that system (including contacting Comcast technical support).

We could also show in the thread this isn’t a customer misunderstanding.  Using a work-around involving a smartphone app called Xfinity Connect Mobile app, the customer database entry for Advanced Call Forwarding would get correctly initialized so ott.comcast.net would respond correctly.  At that point the Settings page would work as documented with the phone number text box and the Add button.  Without the app, getting it working was impossible.  Comcast technical support would frequently recommend just using Standard/Variable Call Forwarding, which as documented in Comcast’s knowledge base is not functionally the same as Advanced Call Forwarding, therefore can not work as a replacement.

The worst part is after 10 long months of ignoring the thread, XfinityBillie selected to close the thread after pointing out that “*72” can enable Variable Call Forwarding.

The distinction is very important for services such as NoMoRobo (which Comcast’s own knowledge base acknowledges can only work with Advance Call Forwarding) among other applications that Variable Call Forwarding can not perform.

Therefore, all further discussion in the thread was terminated on the basis of a technically incorrect “answer” by XfinityBillie.  Again, I recognize he was just trying to help, but he could have actually read the thread to figure out why the answer he was given was incorrect.  Or he could have left the thread open so his poorly researched non-fix could be challenged.  Instead all ten months of effort was brought to an end and trying to work with Comcast was worthless.  Closing the thread with an incorrect statement was the easiest method rather than actually trying to improve the Xfinity experience to work as documented.

Unless the issue is escalated such that the next post here is from the administrator of ott.comcast.net being willing to troubleshoot and correct the actual issue located on Comcast side, I don’t see how any additional screenshots willing ever get things fixed.

The examples of many users having the issue has been available to Comcast through this forum for a year.  If that means Comcast can finally look into it, then look into it.  If it isn’t going to be escalated still and October 2021 to October 2022 will prove to be as unproductive as the last year, then don’t waste our time.

Thank you for taking the time to post on our community forum to bring this issue to our attention, @chilinux! I love having a home phone as a backup and I'd be upset if I wasn't able to use all the features. You've reached the perfect place for assistance and we'll stick with you here until we confirm that this has been taken care of. I understand that there are fields missing from the website and this is not a misunderstanding on your part. Although our website designers do not work over the forums, we can definitely forward this information so it can be corrected from our end.

Please send a direct message by clicking the chat icon in the upper right corner of the page, click on the pen and paper icon, then enter “Xfinity Support” in the “To” section. Please include your name and address and I'll be happy to help.

Anyone seen indication Comcast has made progress on fixing this?  This is not a problem with an individual account.