OK so I am paying a horrendous bill and I was looking at different packages.

I would like someone to explain this to me.

and here is one of the prebuild deals. It includes the top tear internet and the top tier cable TV for 125.00

As it says, the broadcast fee and sports fee are not included and neither is any equipment.

and then you have this...

Those prices are if you are a new customer. If you are existing the price jumps up to 199.90, again the same disclaimers about no sports fees or broadcast fees being included. 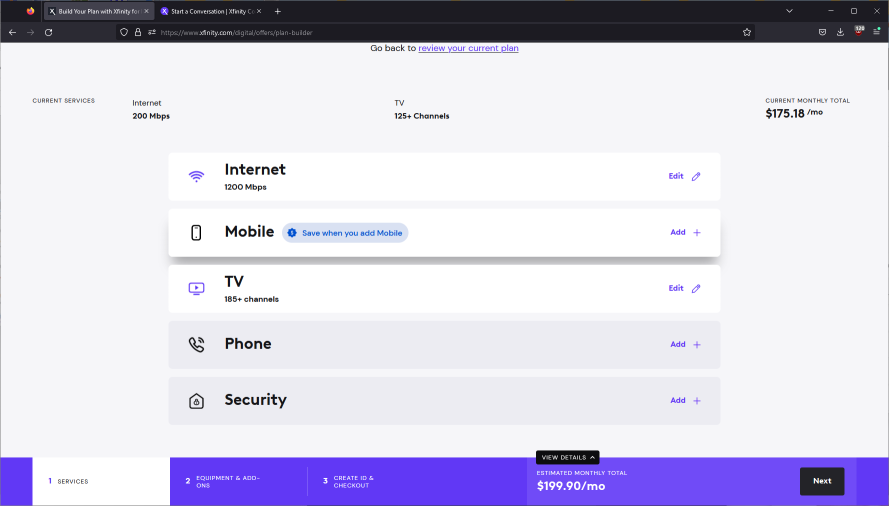 Now check this out. Back to being a new customer. and the customize your own plan.

So say they are adding in the sports fee and the broadcast fee..

OK so let me get my bean counter..

OK so that doesn't add up right.

also check this out. 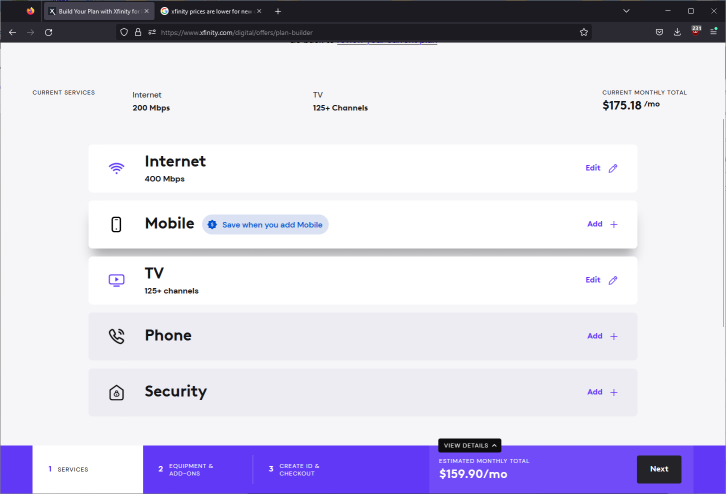 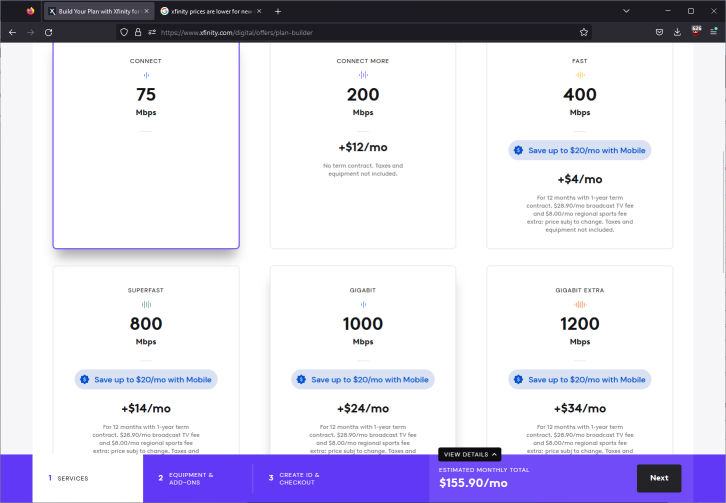 Now, this is important. Read the disclaimer about the sports fee and the broadcast fee not being included.

Remember I said to pay attention to the 159.90 price 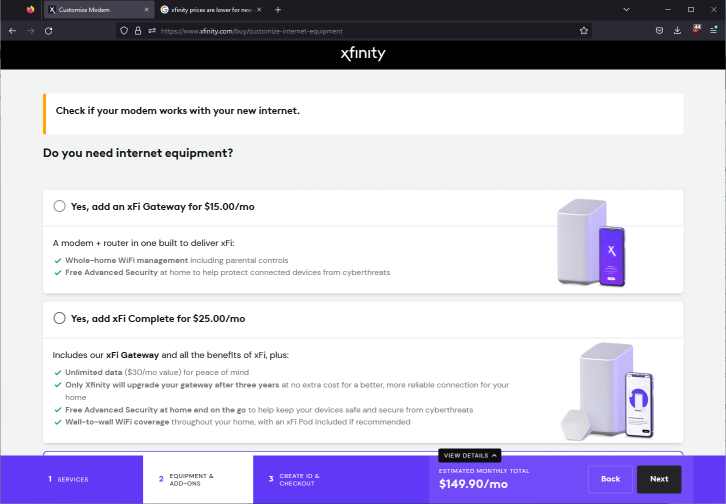 All I did was click on Next for it to select the cable modem/router. I currently have my own so I do not pay a rental fee. How come the price dropped by 10.00 just by clicking on next?
The screens above say I have a 200Mbit service right??.. Are we sure?? 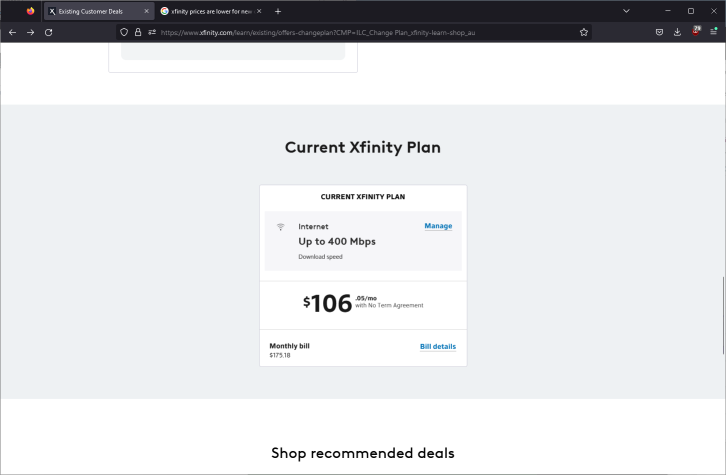 Now that is downright strange.. I can tell you that my speeds have NEVER gone above 160Mbit. 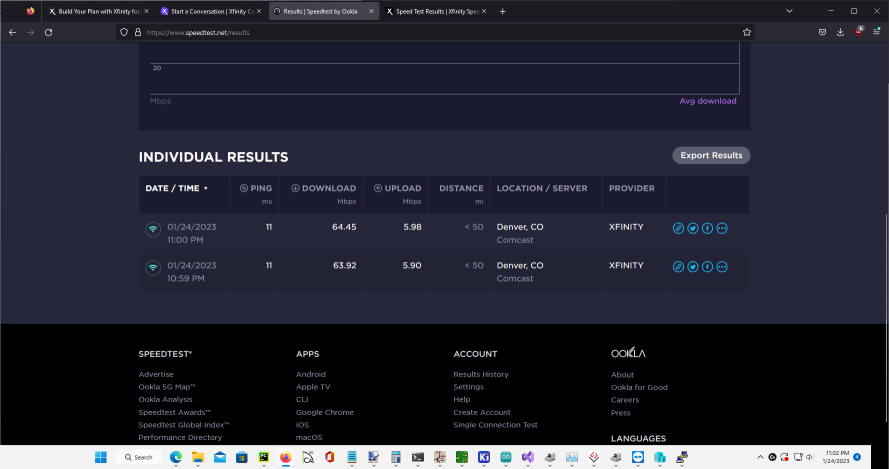 64MBit?!?!?!?
And before anyone gets their panties in a bunch thinking I am on a WiFi Connection. I am not!! 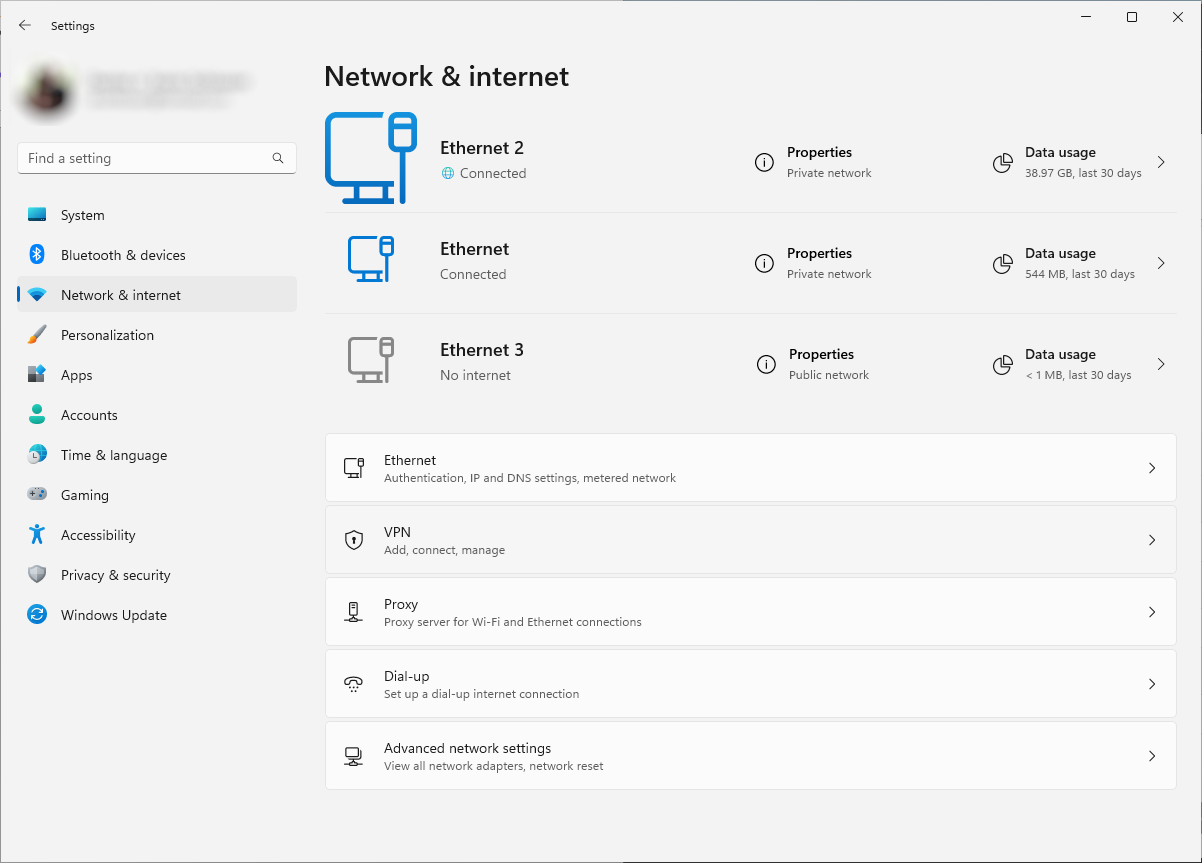 Nope no WiFi there.
And before anyone makes a comment about the number of apps I have running...

As you can see the computer is built for well above what I am doing at the moment.
My network connection is a 10Gbit to my network. and the connection to the modem is 1Gbit.
And for those that might believe that the steed test on Comcasts website is going to be any better... 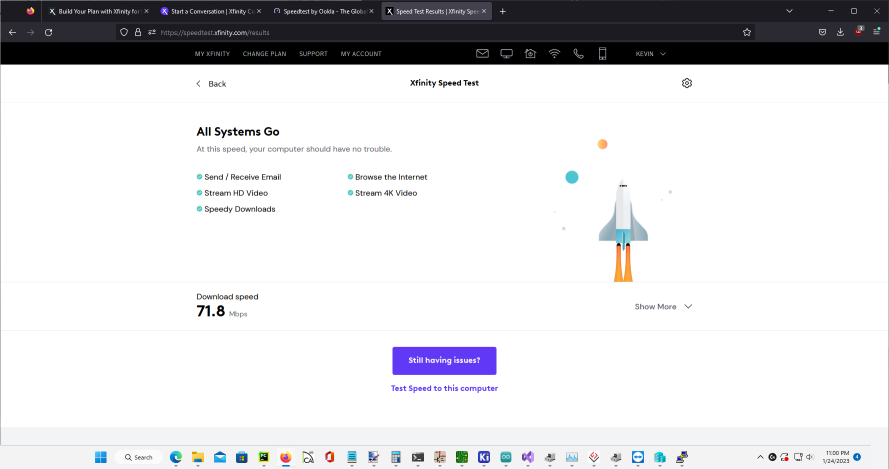 You can think again.
I am wondering why one part of the Xfinity website says I have a 200MBit connection and another says I have a 400 MBit. I am wondering where the deals are because right now I am paying 106 for my package which might be 400 MBit tho I never remember signing on for 400Mbit because I know the maximum I have ever gotten is under 200Mbit. I have 75 bucks in fees from a single cable box, sports fee, broadcast fee and taxes. That would be added onto any package deal that is being offered to me right now. so 159 + 75 = 234 for the exact same package I have now. How is that a deal? I  forgot there is a 10.00 DVR fee as well..  Not sure what that is about because I see no mention of any kind of a DVR fee on any of the plans or even with my current plan.
Why do new customers get better deals??? Why do prices not add up with the packages when the simple math is done? Why am I not able to stop my TV service?? It will not allow me to do that... I am able to select only internet if I am a new customer and it is at one [Edited: "Language"] of a deal compared to what I am paying for now. 200Mbit internet is 39.99 a month and 400Mbit internet is 55.00 a month. The 400Mbit INCLUDES unlimited data and also the modem/router. I can get a package deal for a new customer that is 125 channels 400mbit internet, includes the modem/router and also the cable box with DVR and the price is 85.00 a month. totaling 113 a month with the broadcast fee and sports fee added in. Best rate I can get without the DVR cable box and the modem/router is 159.99 without the broadcast fee and sports fee added in.
Can someone please explain to me why there are these wild differences. and misinformation about getting the same deals as pre-bundled packages when it is clearly not true.

@kdschlosser Thank you for reaching out to us through our Xfinity Forums Community, and thank you for your patience while awaiting our response. I understand you are on our website regarding your plan. I appreciate your feedback and questions, I'm happy to do all I can to help you with your account and services needs. In order to do so, could you please send us a direct message with your full name and full address?

To send a "Direct Message" to Xfinity Support:

The "To:" line prompts you to "Type the name of a person". Instead, type "Xfinity Support" there

- An "Xfinity Support" graphic replaces the "To:" line

Press Enter to send it

OK so an update on this. I managed to get some time and I called Xfinity this morning. After spending 30 minutes going round robin with the automated thing trying to get a hold of a person I was finally able to. What I was told is that the current plan I have is cheaper than the bundled package that matches what I currently have. I was told that because I am not a new customer I cannot get the better pricing. Then the person out of no where starts talking about phone quality and adding that to my current service. They did this right after I made a comment about new customers getting the better deals. The phone service thing came out of left field. My response was "Why in the world do you believe that I would want to sign up for phone service? The internet service I pay for doesn't work right and the cable TV is terrible along with the special ed cable box that responds to remote presses 10 seconds after the button is pressed.". After about 20 seconds of dead air I hung up. I cannot deal with that level of stupidity.

Now within the last hour I have received 4 text messages from this Xfinity assistant saying it can help me and providing a link. I did not ask to receive the messages and I was not told I would be receiving these messages either. This is my official statement of stop sending me the text messages. If the messages do not stop it is deemed as harassment and harassment is illegal in all 50 states in the US, companies are not immune to those laws.

I asked some questions both here and on my phone call with Xfinity and not one of my questions was answered.

@kdschlosser Thank you for taking the time to reach out to use here on by phone. I would be happy to review you account with you in detail and help with removing the TV services as well as check to see what is causing the trouble with the internet speeds.

For removing lines of service, the order has to be processed by an agent and it not an available option online at this time.

New customers receive promotional pricing for a specific amount of time, which eventually moves to our everyday pricing and rates.

I would be happy to check into the internet speeds that the account should have and that you should be receiving. Not long ago internet speed were increased across all lines of service, I do not know without seeing the account why there is a difference in the screenshots, but it may be due to the recent updates to the speeds.

Please send us a direct message and we will help with the account.