I moved to a non-serviceable area and just spent an hour on the phone with a customer service rep and a supervisor.  Neither would help.  Why am I being charged an ETF fee when I had to move to an area that you don't service.  When I disconnected my services I spoke with two reps and both said I would not pay an ETF because Xfinity does not service the area nor do they have plans to service the area.  Then on the phone with the supervisor, I asked for a copy of my contract that I signed and I was told I had to go to a store to get one.  Why do I have to go to a store, you have my information why can't one be emailed to me?  It is pretty sad that you go after people that have to move to a non-serviceable area.

You are the one effectively breaking the contract, not Comcast, so you should get an ETF.

If you are under a contract and you need to cancel service, you may be subject to an early termination fee (ETF).

Hi @user_1063a9. I can imagine how frustrating this must be if there was any confusion on when that fee would apply. It is correct though that if you move to a non serviceable area that would apply. Now if you were under military orders for example, and exception gets made. I would be happy to look into this further and see what we can get emailed over to you. Please send us a direct message with your name and address in full, please!

To send a direct message, please click on the chat icon in the top-right corner of the screen, and select "Xfinity Support" to initiate a live chat.

Press Enter to send it

I had the same issue when moving to a non-serviceable area. Good luck I say to you. I talked to the customer service rep in the store and they told me when I returned the box that the ETF would not apply since I moved to a non-serviceable area. It's not fault that they don't have service at my new address. We would have kept comcast as a provider if they offered a service.

Low and behold I get a surprise bill in the mail for $200. I reached out to customer service and again they told me the charge would be removed and credited (snipped below of the chat transcript)

Started getting harassing phone calls, and looks like it was never removed. Tried a second time, again customer service agent said it would be removed.

Reached out today by phone, and the customer service rep said his supervisor would call me for 'resolution'. Never received a call back.

If they had told me up front when I was moving to pay the ETF, I would have just paid it and moved on. Fact is they told me otherwise, and I feel the company should honor that.

Reached out again to customer service again today, and they said ETFs apply no matter what.

This is the most misleading thing I have experienced with xfinity. Usually the customer service is great.11year as a customer with no missed payments and this is how I am treated. Not sure I still want to use xfinity given the way I was treated. 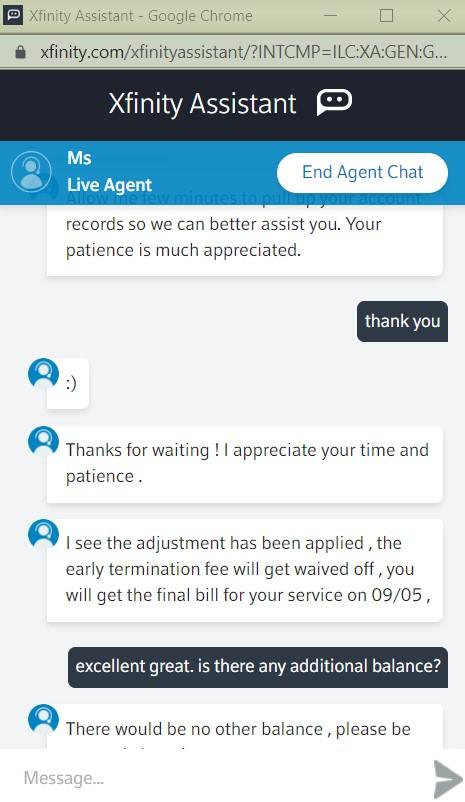 If you are under a contract and you need to cancel service, you may be subject to an early termination fee (ETF).

The early termination fee is explained in your contract, regardless of what someone told you.

@Again -- thanks for the same feedback as above.

The xfinity customer reps should be trained properly to not provide misleading information. I don't think this would be an issue then.